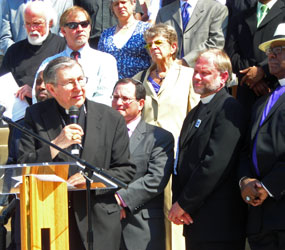 Auxiliary Bishop Denis J. Madden looked around at various Baltimore city faith leaders May 27 and envisioned a day when violence wasn’t a way of life.

Members of The Baltimore Interfaith Coalition filled the front steps of the New Huntington Baptist Church to unveil the group’s Declaration Against Violence and launched a “Fifth Sunday: Violence to Virtue” program.

“Our faith in God is just what drives us,” Bishop Madden told The Catholic Review. “We believe that God gives the grace to act and that’s what we’re trying to do.”

During the news conference, Bishop Madden said an end to violence can happen with the coalition’s new projects.

The declaration was another bold step by the coalition, which was formed in 2009 and is co-chaired by Bishop Madden. The declaration looks to shake up the status quo in Baltimore, which the coalition said has “become ensnared in a covenant with death.”

“The evil inflicted upon our community can be overcome by the faith, morality and spiritual vision that are our heritage to be reclaimed,” the declaration said. “The time has come for a renewed effort to recognize the truth of our situation, to be brutally honest in studying its causes, and to forge a new community-wide commitment to a more creative and effective response.”

The goal of the “Fifth Sunday” program is to partner faith communities with the state’s attorney’s office to stress the importance of values in teaching children how to build community.

The faiths will collect funds each fifth Sunday service of a month, which occurs four times this year. The money will go toward youth-oriented activities, which were suggested at the state’s attorney’s Office of Juvenile Justice forums.

Bishop Madden said apathy to the problems is never acceptable.

“I think what we’re beginning to do is chip away,” he told The Catholic Review. “It has not brought an end to all violence or an end to one area of the city. But, we’re chipping away at it. What we’re trying to attack is a pervasive attitude that ‘that’s it, life is like that. You live in the city, that’s the dues you pay.’ We don’t believe that’s true and we don’t think it has to be that way. We can do better than that.”

More than 1,800 people gathered in January at the Cathedral of Mary Our Queen in Homeland for prayer vigil service that addressed violence. The event, sponsored by the interfaith coalition, was one of the larger interfaith gatherings since the Civil Rights Movement.

Therese Wilson Favors, director of the archdiocese’s Office of African American Catholic Ministries, was amongst the crowd for the May 27 announcement. She said the coalition’s declaration and fifth Sunday program were major steps to reverse disturbing trends.