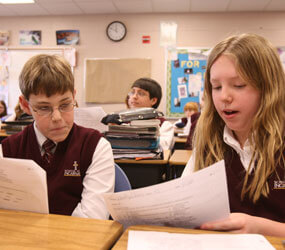 GAMBRILLS – There was a noticeable buzz in the air as second graders plopped soft-covered workbooks on their desktops and pulled out number-two pencils one recent January morning at School of the Incarnation in Gambrills.

Boys and girls kept popping out of their seats as the language arts class began, only to have their teachers gently remind them to stay in their chairs. Many of the youngsters looked around the room with a sense of excitement before an instructor announced what they had been anticipating for a long time.

One student let out a squeal and a “yay!” as others smiled and gripped their pencils more tightly.

Lerch compared the looping upswing of the cursive letter ‘b’ to riding on a swing, demonstrating the motion on a chalkboard and then inviting her students to trace the letter in their workbooks. The class quieted as intensely focused children practiced what they had been taught and Lerch walked from desk to desk to offer help.

In another corner of the room, Jennifer O’Leary taught another group of second graders about verbs – encouraging them to come up with active words dealing with snow.

Hanging overhead were portraits of Pope Benedict XVI, Archbishop Edwin F. O’Brien, Bishop Mitchell T. Rozanski and the six pastors who lead the six parishes that work together to support the fast-growing inter-parish school in Anne Arundel County. Another prominent sign near a crucifix proclaimed a heavenly message: “You are a chosen instrument of mine.”

“Cursive is fun because it puts all the letters together,” said 8-year-old Gaby Galoppo. “It’s fast, too.”

The breakthrough day at School of the Incarnation was nothing new. Incarnation is a place where teachers are encouraged to bring out the best in their students and provide individualized attention in an environment that bolsters faith.

With 785 students in grades K-8, the school is one of the biggest in the archdiocese and is regarded as one of the Catholic school system’s educational jewels.

In many ways, Incarnation may be a model of the future of Catholic education.

First housed at Our Lady of the Fields in Millersville when it was established in 2000, Incarnation started with 60 kindergarten students.

New grades were later added and a $10.5 million facility was opened in 2002 that features spacious classrooms as well as rooms for computers, music, art, foreign language and science. There’s also a media center/library, a chapel and a large multi-purpose room that serves as a gymnasium, cafeteria and auditorium.

Unlike most schools in the archdiocese, Incarnation is affiliated with multiple parishes: St. Elizabeth Ann Seton, Crofton; Church of the Holy Apostles, Gambrills, Holy Family, Davidsonville; St. Joseph, Odenton; Our Lady of the Fields, Millersville and Our Lady of Perpetual Help, Edgewater.

The pastors of those parishes compose a board of pastors that governs the school. There is also a school board and an active Home School Association. The principal oversees a staff of 70.

Father Eugene Nickol, pastor of Our Lady of the Fields and president of the board of pastors, said the inter-parish model has been a blessing to the school and faith community alike. He noted that the parishes pulled together to support a capital campaign that paid the expenses of erecting the school. A benefactor donated $1.8 million to build a middle school wing in 2004 that pushed the enrollment capacity past 800.

“It’s working pretty well,” Father Nickol said. “I think the six parishes are committed to the school, and they’re feeding kids into the school and supporting the school. In those ways, it doesn’t drain one parish to have the school.”

The parishes are ready to assist with emergency expenses, Father Nickol said.

“It’s tuition at cost,” he explained, “but we try to save them from those big expenses just as we have done to pay off those mortgage bills.”

It costs more than $4 million annually to operate Incarnation, and tuition stands at $5,580. Last year, the school gave out $150,000 in financial assistance.

Unlike other Catholic schools that rely on candy bar sales or magazine drives to help raise money, Incarnation eschews traditional fundraisers. Instead, it has established an annual fund and relies on big events sponsored by the Home and School Association.

Dr. Edmonson noted that one of the great advantages of being affiliated with multiple parishes is that children get to meet priests from throughout the community.

“The priests celebrate Masses and hear confessions,” said Dr. Edmonson, who sends three of her four children to Incarnation. “They come in and visit the classroom and we had one priest who even played in the band with the kids.”

Having multiple parishes enriches the learning environment, according to Gina Judge, kindergarten teacher. Judge noted that the children bring their unique experiences of parish life into the classroom and share it.

“Each parish has its own personality, and the children bring that parish’s perspective into our discussions,” Judge explained.

Each school day begins with a prayerful assembly, and there are also monthly Masses. Individual classes gather in the chapel for prayer and liturgies. Physical signs of faith are manifold: Religious statues, pictures and signs all adorn the school. The papal, American and Maryland flags fly side by side in front of the school.

On a recent school day, Incarnation teachers brought second graders into the chapel to pray and offer support to a classmate whose great aunt had died.

“We try to go to the chapel as often as we can,” said Lerch, noting that teachers appreciate the flexibility to incorporate faith throughout the curriculum.

“In science class we can say God created the earth and we should be thankful. Faith formation is central to what we do.”

The school incorporates a holocaust awareness program and educates students about Judaism, Hinduism, Islam and other religions.

There’s a strong focus on social justice, with children involved in many service projects. Students recently filled 960 backpacks with goods for the poor. They were distributed in Baltimore City on Christmas Eve.

“Outreach is our bread and butter,” said Dr. Edmonson, Incarnation’s founding principal and a recipient of the archdiocese’s distinguished principal of the year award.

‘We are a family’

Carl Salinger will never forget Sandi Dlugonski, one of the 12-year-old seventh grader’s former math teachers. Dlugonski had an ironclad rule in her class: no one was allowed to utter the words “I can’t.”

“If you did, you had to bring in a dollar for charity,” Carl remembered with a laugh.

Having a positive attitude forced students to look for solutions and power through difficulties, he said.

“It opened a lot of possibilities so that things that would seem impossible became possible,” he said.

Abbey Moran, a 12-year-old classmate, said many teachers foster that same spirit throughout the school. The students eagerly embrace a culture of learning, she said.

“I know how some schools have bullies,” she said. “That doesn’t happen here. Here, the smartest people are probably the most respected. That makes me want to study more and work hard because it’s the people our age who inspire us to work hard.”

Incarnation uses a curriculum that incorporates religion, literature-based reading, language arts, an interactive math program, science, social studies, music, art, physical education and foreign languages. It also offers sports and enrichment programs, in addition to before- and after-school extended programs. Like other schools in the archdiocese, the teachers employ curriculum mapping to monitor what children are learning and avoid redundancies.

The all-encompassing approach is having an impact. Test scores are exceptionally strong, with 8th graders last year ranking at the 81st percentile or above in every category on the Stanford 10 Standardized Test including reading, math, science and language.

Dr. Edmonson noted that many of the same teachers who first joined the staff in the first few years of Incarnation’s existence still serve there.

“We have very little attrition,” she said.

The principal acknowledged that the biggest challenge of her job is steering an institution of such massive size. She likened the late afternoon hustle and bustle of the hallways to being at an airport.

“I think we are blessed with a very strong sense of community,” Dr. Edmonson said. “It’s not just about academics. We are a family.”