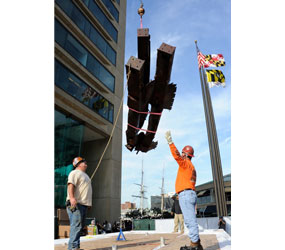 In late August 2010, Barbara Bozzuto and other Marylanders visited a hangar at John F. Kennedy International Airport in Queens, N.Y.

Their task was a solemn one, studying wreckage of the World Trade Center and selecting a centerpiece for the 9/11 Memorial of Maryland, which honors the 68 Marylanders who were killed in the Sept. 11, 2001, terrorist attacks in Manhattan, at the Pentagon and in Shanksville, Pa.

“We were overwhelmed by the sacredness of the (hangar) space,” said Bozzuto, a member of the Maryland memorial’s executive committee and past chairwoman of the board of St. Agnes Hospital. “There was twisted steel from areas of the north and south towers that had received direct impact.

“These artifacts spoke to us. We wanted to use them to provide a place for survivors to remember their connection, and a memorial that speaks to the dignity of their loved ones.”

That memorial, on the north side of the World Trade Center in Baltimore’s Inner Harbor, will be dedicated Sept. 11, at 3 p.m. It will include a reading of the names of Marylanders who were killed.

The memorial’s centerpiece is a 22-foot steel artifact from north tower of the World Trade Center, consisting of three twisted and torn steel columns. It will sit atop limestone pieces from the Pentagon’s west wall. According to maryland911memorial.org, no artifacts can be obtained from the Shanksville site, but it will be represented with three large pieces of polished black granite.

Every Sept. 11, according to the website, the shadow of the World Trade Center will slowly move across the memorial and “cross inscriptions indicating the time of the events” of 10 years ago.

The memorial has an accompanying exhibit on the 27th floor of the World Trade Center.

The memorial’s contributors include Loyola Blakefield, Towson, in memory of Daniel W. McNeal, a 1990 graduate. McNeal, 29, was working as a financial analyst on the 104th floor of the south tower in Manhattan when terrorists attacked. Loyola Blakefield also awards a scholarship in his name, to a student who is committed to academic excellence and community involvement.