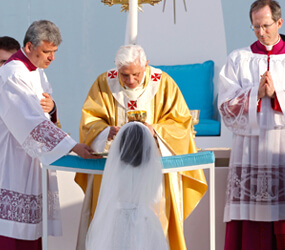 LISBON, Portugal – At a Mass for more than 100,000 people in Portugal, Pope Benedict XVI urged Catholics to re-evangelize society by witnessing the joy and hope of the Gospel in every sector of contemporary life.

“Today’s pastoral priority is to make each Christian man and woman a radiant presence of the Gospel perspective in the midst of the world, in the family, in culture, in the economy, in politics,” the pope said May 11 at an open-air liturgy in Lisbon, the Portuguese capital.

To evangelize effectively, he said, Catholics themselves need to grow closer to Christ.

“Bear witness to all of the joy that his strong yet gentle presence evokes, starting with your contemporaries. Tell them that it is beautiful to be a friend of Jesus and that it is well worth following him,” he said.

The pope celebrated the Mass on a canopied altar overlooking Palace Square, which was packed with enthusiastic faithful. When he arrived in his popemobile, they chanted, cheered and held homemade signs welcoming “Bento XVI,” as he is known in Portuguese.

Despite a forecast of rain, sunshine lit the square and the Tagus River in the background, where schooners and other vessels cruised slowly. It was the first liturgical moment of a four-day visit that was also to take the pope to the Marian sanctuary of Fatima and the industrial city of Porto.

On the plane carrying him and his entourage from Rome, the pope told reporters he was concerned about radical forms of secularization that threaten the religious traditions of countries such as Portugal.

In his homily in Lisbon, which the pope delivered in Portuguese, he said that despite Portugal’s long Catholic tradition, it is “less and less realistic” to presume that the Christian faith is present among its people. Part of the problem, he said, is that the church may have placed too much trust in ecclesiastical structures, programs, powers and functions.

The pope said it was important now to return to more fundamental things and to proclaim with vigor and joy the death and resurrection of Christ, the “heart of Christianity.”

“A vast effort at every level is required if every Christian is to be transformed into a witness capable of rendering account to all and at all times of the hope that inspires him,” he said.

He asked Catholics to grow in friendship with Christ, listen to his words more carefully and learn to recognize him in the poor.

“With your enthusiasm, demonstrate that, among all the different ways of life that the world today seems to offer us – apparently all on the same level – the only way in which we find the true meaning of life and hence true and lasting joy is by following Jesus,” he said.

The pope said that while the church may have “quarrelsome and even rebellious sons and daughters,” the real models of holiness are its saints. He reminded Portuguese Catholics of their own rich history of saints and missionaries who have taken the Gospel to every continent and helped shape cultures all over the world.

Earlier in the day, Pope Benedict said the church was ready to live in a pluralistic society as long as it can give witness to its beliefs, and as long as religion was not reduced to the private sphere. His message was aimed at the increasing numbers of Portuguese who have fallen away from practice of the faith. In theory, Catholics represent 88 percent of the population in Portugal, but the number of practicing Catholics is diminishing.

Portuguese church leaders are also concerned about other trends – for example, Portugal’s marriage rate has declined by 40 percent over the past 25 years, while its divorce rate has soared over the same period.

The church’s own statistical markers signal similar tendencies in Portugal: a gradual and persistent decline in the numbers of baptisms, church marriages, first Communions and confirmations, along with a drop of nearly 60 percent in the number of seminarians over the past 35 years.

Portugal’s pluralism today includes an increasing immigrant population. In a talk to the pope at the start of the Mass, Cardinal Jose da Cruz Policarpo of Lisbon said the capital has welcomed outsiders, including those of different faiths, with love and respect. The church is committed to dialogue and seeking common values, he said, and “a Catholic majority does not rob anyone of his place” in society.

At the end of the liturgy, the pope read a message blessing a giant statue of Christ the King that stands on a hill above Lisbon. He said the statue should inspire Catholics to build a society based on Gospel values, in particular by working in favor of the poor and the oppressed.