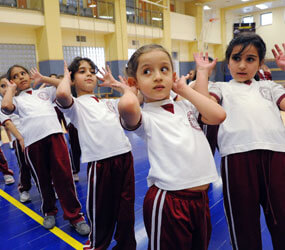 JERUSALEM – Rosary Sister Hortense Nakhleh’s eyes crinkle and her giggle is infectious as she recounts how she accompanied a group of students from the Rosary Sisters’ High School to a space camp in Turkey recently. She even received a certificate of participation like the students.

“Why not?” said Sister Hortense, 64, laughing at the memory and glancing at the shiny blue folder with a picture of a spaceship on her orderly desk.

As principal of a school with two campuses and classes from kindergarten through 12th grade, Sister Hortense rarely gets a chance to travel or take a break, so the trip to Turkey truly was a special treat.

Even during the recent vacation for the Muslim holy month of Ramadan, Sister Hortense spent her time overseeing repairs at the school.

“This is your house; you can’t rest or relax when someone is inside,” she said.

Despite the giggle and the crinkles, it is clear that Sister Hortense, when necessary, can be a formidable force to contend with. She opposed a plan for the Israeli separation barrier to divide the high school building from the convent and elementary school building down the road. She took her opposition all the way to the Israeli Supreme Court and won her argument.

In 2008, construction of the wall was completed, and both campuses were included on the Israeli side of the barrier.

Such dedication to academic excellence and to the overall well-being of students has earned the Rosary Sisters’ schools in Israel and the Palestinian territories the respect and admiration of the people they serve. The schools are among the most in-demand for Arab girls.

It is also very important for the order – established in 1880 as the Dominican Sisters of the Holy Rosary of Jerusalem – that its co-founder, Sister Soultaneh Maria Ghattas, will be beatified during a Mass Nov. 22 in Nazareth, Israel.

“Our main aim is to educate and prepare Middle East young women, to promote the enhancement of Arab women spiritually, educationally and socially,” said Sister Ildephonse El-Harjjen, the order’s secretary-general. The beatification is a confirmation of that mission, she said.

Sister Hortense explained that the Rosary Sisters also are highly regarded in the Muslim community. Most students and alumni of the schools are Muslim, she said.

“It is very important … that (Muslim) girls study in girls schools,” she said. Muslims “notice our hard work and the hard tasks we are offering to this country and their daughters. We are continuing with this although the situation is not so easy in our country.”

Members of the order are fasting every Saturday in October and November until the beatification. Members also spent an additional hour of adoration before the Eucharist for the three days leading to the feast of Our Lady of the Rosary Oct. 7. They have been asked to make extra efforts toward repentance and to visit Christian families to explain the upcoming beatification ceremony and pray the rosary with them.

Though in the Holy Land there have always been many different religious orders, the Rosary Sisters are the only local community. All 261 members are local, Arabic-speaking women. Members also minister in 61 educational and medical centers as well as Latin Patriarchate parishes throughout the Middle East and in Rome.

While most foreign orders historically have remained in larger cities, the Rosary Sisters minister in small villages, working with the parish priest to reach Christian girls, said Sister Amal Abou Anton, a supervisor at the Rosary Sisters’ High School in the Palestinian neighborhood of Beit Hanina in East Jerusalem.

“They are one of us,” said Sireen Freij, an English teacher and alumna of the school. “They know all the people personally. It is very different from getting a nun who is transferred from one place to another.”

The sisters are active in the community and there is no wedding, baptism or funeral that one or two of the Rosary Sisters do not attend, Freij said. The sisters are well-loved by the Christian community because they not only understand the local language but also the community’s customs and traditions, she explained.

The beatification, she said, is an honor for all Palestinians.

Given the economic, political and social difficulties young girls are confronting, the staffs of the Rosary Sisters’ schools work hard to provide extracurricular activities for the girls, Sister Hortense said. The schools have participated in numerous international programs and conferences that allow the girls to travel abroad.

“We believe education is not only in the schoolwork, but the goal of these conferences is to get (the girls) to live with an open mind and accept the other. We speak about dialogue with the other, including the Israelis,” said Sister Hortense, noting that Hebrew is the fourth language the students are taught in the school.

At the start of the school year Sister Hortense announced the beatification at a school assembly and the Christian students – who constitute about 12 percent of the student body – have begun to study the life of Sister Soultaneh Maria. The focus on the order’s founder also provides an opportunity for the majority Muslim students to learn a bit more about the concept and process of sainthood, Freij said.