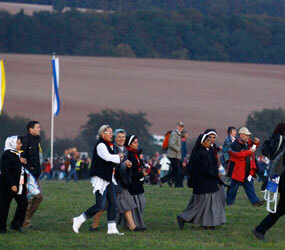 ETZELSBACH, Germany – The Marian sanctuary of Etzelsbach does not show up on most maps of Germany.

But for Pope Benedict XVI, the tiny shrine looms large on the country’s religious landscape. Despite decades of persecution under communism, this small Catholic community kept the faith.

The pope helicoptered to the pilgrimage site at the end of the second day of his Sept. 22-25 trip to his German homeland. After addressing the German parliament, celebrating Mass in Berlin’s Olympic Stadium and holding a historic encounter with Lutheran leaders, the stop in Etzelsbach might have seemed an afterthought.

But that would be to misread Pope Benedict’s priorities.

If the stated theme of his German visit was to remind a secularized society about God, here was a place where religious values remain strong – an island of belief in a sea of religious indifference and, for the pope, well worth a pilgrimage.

“I think the pope is coming here to meet the base of the church community. He wants to meet the very simple people, people who have remained faithful in a very traditional way,” said Doris Binder, a 55-year-old Catholic who sat on a hillside next to the sanctuary.

“Perhaps being far from the big cities was better for people here. Their faith held them together,” Binder said.

A multitude turned out for the pope, and it was a diverse crowd: school kids and families, tattooed teenagers and elderly pilgrims from the Eichsfeld region, a small Catholic enclave.

Living under communism has left many nonbelievers in this part of Germany, but a visitor would not know it from the crosses, chapels and roadside stations of the cross found in the group of villages surrounding Etzelsbach.

The Marian sanctuary owes its origins to a local tradition that is still well-remembered by pilgrims. About 400 years ago, a farmer was plowing a field when he saw his horse fall repeatedly to its knees at the same spot. The farmer dug in the soil and found a wooden carving of Mary holding the dead Christ – a rustic Pieta – and with that, the pilgrimages began.

Presiding over vespers for the approximately 90,000 people gathered at the shrine, the pope prayed before the statue and spoke about its meaning in simple language.

“The hearts of Jesus and his mother are turned to one another; they come close to each other. They exchange their love,” he said.

He said Mary, with a mother’s tenderness, wants all people to respond to God’s love.

“When we allow God’s love to influence the whole of our lives, then heaven stands open. … Then the little things of everyday life acquire meaning, and great problems find solutions,” he said.