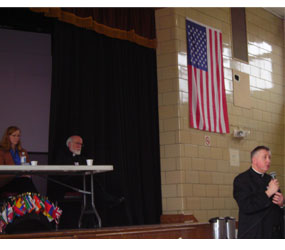 The U.S. Conference of Catholic Bishops and the Archdiocese of Baltimore are expected to make a major push for comprehensive immigration reform as election season approaches.

The Archdiocesan Immigration Coalition held a first-ever gathering for parish leaders March 11 at John Paul Regional School in Woodlawn. The group’s goal is to promote reform and create a smoother path toward U.S. citizenship for undocumented people.

“One of the issues, certainly in the United States, is there’s much more heat being generated than light,” Auxiliary Bishop Mitchell T. Rozanski said. “The bishops perspective is … to bring to this topic a lot of light so that leaders of parishes will be knowledgeable about immigration reform as we seek to bring a Catholic perspective to light.”

The Archdiocesan Immigration Coalition was created by Archbishop Edwin F. O’Brien in fall 2008 and is comprised of pastors and pastoral leaders. The coalition includes immigration rights group CASA Maryland and representatives from the Episcopal Church.

The coalition’s president is Father Joseph L. Muth, pastor of Northwood’s St. Matthew and Baltimore’s Church of the Blessed Sacrament.

Tony Cube, National Field Manager for the Justice for Immigrants office of the USCCB, told attendees that efforts in recent years to apply increased security on U.S. borders have failed. The reason, he said, is that militarizing borders does not address the millions of undocumented workers currently in the U.S.

Cube said the USCCB is taking a greater role in immigration reform because “this issue is coming to a boil in Congress right now.”

At the meeting, a Salvadoran woman named Blanca, who faces her own deportation March 24, emotionally told attendees how she came to the country for a better life.

“I just want an education for my children and want what’s good,” she said.

She feared the stigma of being called a criminal.

Father Muth praised Blanca and said, “can you imagine describing yourself in a negative way?”

Father Ty S. Hullinger, administrator of St. Mary in Cumberland and St. Patrick in Mount Savage, told attendees how parishioners at his Allegany County parishes have been rounded up as well.

Maria Johnson, director of the archdiocese’s Hispanic ministries division, told the parish leaders, “there is a lot of power in the Catholic community and we need support from them.”