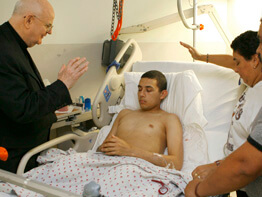 WASHINGTON – Along with all the other military jargon and abbreviations, a relatively new term keeps bubbling up to the surface at Walter Reed Army Medical Center, as well as in popular parlance: IED.

The patient information sheets at Walter Reed aren’t always accurate, but they include identification of patients by religion. Father Patrick Kenny, the only full-time Catholic chaplain at Walter Reed, uses them to greet, comfort and bless the Catholic patients there.

Sgt. Juan Roldan was with his infantry unit when one of the devices exploded. The injuries he sustained required that both his legs be amputated above the knee. “I don’t remember much,” Roldan said softly as his mother stayed by the foot of his bed. “I think I’ll be here for a while.”

“He’ll be walking – soon,” Father Kenny said, providing positive reinforcement to Mr. Roldan after extending a blessing to the soldier.

Spc. Vincent Ramirez was sitting in a hospital corridor in his wheelchair when Father Kenny spied him and gave him a blessing. Mr. Ramirez was awaiting therapy; he had lost one leg to an IED.

Pvt. Adrian Garcia of El Paso, Texas, was with his parents in his hospital room when the priest dropped in. Mr. Garcia lost both legs above the knees because of an IED. Father Kenny murmured a blessing to both Garcia and his parents.

Spc. Chastie Matthews of Dycusburg, Ky., too, is a victim of one of the devices. When he spoke with a Catholic News Service reporter in mid-April, he had been at Walter Reed for three weeks. How much longer would he stay before he could go back home? “Nine months, it may be,” he replied.
He and other soldiers from his unit were in a jeep when they hit an IED. “I’d seen the wire and we really didn’t know how to avoid it,” Mr. Matthews recalled. The other soldiers in the jeep were also injured – one, Mr. Matthews said, had burns over 38 percent of his body – but “I got the worst of it.” Mr. Matthews, too, lost both his legs.

Spc. Ulises Lopez of Phoenix was in relatively better shape. He got his injuries from armor-piercing munitions, but he lost no limbs, and was slated to stay at Walter Reed only a few days. His two sisters, Elvira and Adelina, flew in from Phoenix to stay with him until he was released.

Spc. Jesus Bustamante of Tucson, Ariz., was hit by a sniper. While the bullet eventually lodged in his hip, it did extensive internal damage before it found its resting place. Father Kenny consoled him before giving him a blessing. “He’s a great man, a great man. He’s come a long way,” the priest said. “I’ve got a long way to go still,” Mr. Bustamante interjected.

Despite Walter Reed’s slogan, “We Provide Warrior Care” – which is prominently displayed at the main hospital entrance and throughout the complex – not every patient at Walter Reed is a casualty of war. The hospital also treats active-duty personnel with maladies that afflict them as they would civilians, the children of active-duty military personnel, and retirees from the armed forces.

Col. Chuck Callahan, Walter Reed’s deputy commander, was waiting for surgery when Father Kenny stopped in, accompanied by a reporter and a photographer from Catholic News Service. “Can I tell them of the time you almost stabbed me?” Mr. Callahan asked the priest with a laugh. “He tried to shake my hand while a pen was still in it.”

In the pediatrics ward, 5-month-old Laura McCoyd, whose parents both served in the Marines, was ready to check out after having gotten over some breathing difficulties. Dad Kevin and mom Janet McCoyd had the books “Our Daily Bread’ and “The Children’s Living Bible” on a table at Laura’s bedside. The infant slept through Father Kenny’s blessing.

Then there was 23-year-old Pfc. Casimir Werda of the Detroit suburb of Novi, Mich., who was blinded in a March 14 attack while serving in Iraq. His mother, Flo, was at his side while he sat in a chair, strumming the lyrics to Lynyrd Skynyrd’s “Simple Man” on a guitar that was autographed for him by Fleetwood Mac chanteuse Stevie Nicks.

Mr. Werda is working on improving his guitar-playing skills while the Walter Reed medical staff is working to improve his health. “Maybe someday he’ll get his eyesight back,” Father Kenny said. “That’s what we’re hoping,” Flo Werda replied.

And these were just Father Kenny’s morning rounds prior to his noontime weekday Mass, with an improvised invocation for a critical care nurse sandwiched in between. The priest still had many more people to see as part of his typical 12-hour workday.