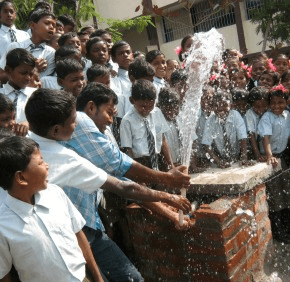 Schoolchildren in Rerua
The Catholic Men’s Fellowship of Maryland Annual Conference March 25 focused in large part on evangelization, with which the men’s fellowship groups of the Catholic Community of St. Francis Xavier in Hunt Valley and St. Joseph Parish in Cockeysville have been engaged for 15 years.

Indeed, the groups’ annual Nothing’s Wasted Dinner has funded outreach in India for eight years now, continuing the legacy of their spiritual mentor, Jesuit Father Francis “Frank” McGauley, a well-known missionary to the second-most populated country in the world.

“We heard his stories about the need for clean water in India,” explained Roger Cassell, a founding member of the first of the men’s groups.

President of a company specializing in wireless communications, he was in his Timonium office when Rob Bart Jr., a parishioner of St. Francis, entered to sell him long-distance telephone services in the late 1990s.

Though his wife was Catholic and he had married her at St. Francis, Cassell was Lutheran. The content of that first conversation with Bart merited a change of setting, so they headed to Bob Evans and started meeting regularly to study Scripture, specifically St. Paul’s letters to St. Timothy.

Members of the men’s groups from the Catholic Community of St. Francis Xavier in Hunt Valley and St. Joseph Parish in Cockeysville enjoy the Catholic Men’s Fellowship of Maryland Annual Conference March 25. Pictured are, from left, Chuck Bauermann, Rick Pierce, Rob Bart Jr., Paul Johnson, Pat Bennett, Pat Hanley, Mike Gardner, Marty Crawford and Mark Fitz-Patrick.  (Kevin Parks/CR Staff)
Cassell and Bart’s informal Bible studies – which led to Cassell’s reception into the Catholic Church in 2000 – grew to include other men, and the St. Francis Xavier Men’s Fellowship was officially launched in 2002, originally meeting in a conference room at Communications Electronics, Cassell’s company. The group eventually moved to Chatard House, a renovated farmhouse that serves as St. Francis’ parish offices and is named for the family that once dwelt three.

Father McGauley came on the scene back in 2004. The group was looking to undergo the arduous Spiritual Exercises of St. Ignatius of Loyola, and a member suggested they consult a retired Jesuit priest he knew.

A former professional baseball prospect, Father McGauley, whose size-14 feet earned him the nickname “Footsy,” had carried a Louisville Slugger around India for protection during his 31 years there.

He agreed to join the group, “not as the leader or as the ‘group priest,’” but as a member, Cassell remembered.

The group met, and still meets, Fridays at 7 a.m. A volunteer had to wake up early enough to drive to Woodstock, where Father McGauley lived, and drive him back to Timonium for the meeting.

“Believe it or not, the guys used to fight about whose turn it was,” Cassell said, recalling the pearls that surfaced during drive-time conversation.

The group completed the spiritual exercises, taking close to four years to do so, and went on to keep vigil with Father McGauley when he went into hospice at Stella Maris in Timonium. He died in 2008, and members of the men’s fellowship served, at his request, as his pallbearers.

“We took turns spending the night with him for the last six weeks or so,” Cassell said.

Eight years later, their Nothing’s Wasted Dinner, named for one of Father McGauley’s maxims, has raised $120,000, resulting in 70 wells in the villages where the priest ministered.

“Father Frank’s been gone for eight years, but he’s still making an impact here, and in the villages he served,” Cassell said.

There is no charge for the dinner itself, and, because the men’s fellowship groups finance the event, all funds raised go directly to the charitable cause. More information is available at ccsfx.org/mens-group.

Rick Pierce, a parishioner of St. Joseph, said that the effort “has given me a much deeper appreciation for just the basic things I have.”

“I mean, I have much more than the basic,” he added. “When I turn on the tap in the morning I think of those people in India – we take it for granted our whole life.”

Pierce is an early member of the St. Joseph group, which intentionally split from the original group about four years ago in an effort to reach more men.

“We’ve divided and multiplied, as it were,” Cassell said.

At a recent Friday morning meeting at St. Francis, the group was discussing a book by theologian, author and speaker Edward Sri, “Who Am I to Judge? Responding to Relativism with Logic and Love.”

“Our focus is to pick studies that help us be better men, fathers, husbands and businessmen,” Bart, who was leading the meeting, explained.

“And better retirees,” said another member.

“Better golfers,” put in another.

Michael Gardner, a founding member of St. Francis Xavier, which is celebrating 25 years as a parish this year, just joined the group last year.

“It’s a great chance to hear the views of other people, and a chance to discuss real questions, whether it’s about Scripture or how to live your faith,” he said.

Offering it up: St. Philip Neri students sweat to Stations of the Cross

Lifting up the ‘little people’: Baltimore Jesuits to open preschool

Men’s conference participants told to be on fire, not ‘lukewarm’