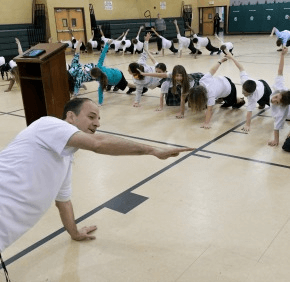 Father Michael DeAscanis
LINTHICUM – It’s one thing to get kids pumped up about fitness.
It’s another to get them excited about their faith.
At St. Philip Neri School, students embrace both simultaneously.
Approximately 40 students at the pre-K to grade 8 school arrived early April 6 for fitness Stations of the Cross, moving through push-ups, air squats, burpees and other calisthenics, with each 60 seconds of relatively intense exercise preceded by a reflection on one of the exponentially more intense sufferings Jesus experienced as he journeyed from Pontius Pilate’s palace to his death on the cross.
“It’s a way of reminding our students that Jesus loved us not just in his thoughts but in his actions – he served us physically, in his body,” said Father Michael A. DeAscanis, pastor of St. Philip Neri Parish, who leads students in reflections before joining them in the exercises. “So when we’re exercising and we’re tired, we offer it up as a prayer. It’s a way of kind of entering into the work Jesus did.”

The Stations of the Cross are projected onto the gym screen at St. Philip Neri School in Linthicum Heights as students arrive early to participant in a program of physical and spiritual fitness April 6.  (Kevin J. Parks/CR Staff)
Early-arriving students have the opportunity to participate in regular “fitness stations” Monday through Friday. The fitness Stations of the Cross are offered Thursdays during Lent.
“The stations in general are a great way to start the morning with some exercise, to get your day started the right way,” said physical education instructor Travis Bateman, who leads the exercises, “but being able to do the Stations of the Cross – being able to incorporate Jesus into that and prayer into that – and then also having Father (DeAscanis) here, motivates the students a lot more and has brought more students into the gym.”
“They enjoy it, and I see their faces light up when they see that Father’s here, too,” he added.
Father DeAscanis said that the practice was born of discussions on “how we could spend more time with the students.”
Bateman found a template for fitness Stations of the Cross online, but it was written for a high school varsity team.
“We were dying,” Father DeAscanis laughed. “We ramped it down a little bit to the level of middle schoolers.”
He said the fitness Stations of the Cross fit well into St. Philip Neri School’s emphasis on “forming the whole child – mind, body and soul.”

St. Philip Neri School, Linthicum Heights, third-graders Gabe Zaragoza and Sam Maddalena work out in the school gym during fitness Stations of the Cross April 6. (Kevin J. Parks/CR Staff)
“Whatever we do – in mind, body or soul – can be a way of glorifying God if we bring it to prayer,” he said.
Students are getting the message, Father DeAscanis added, noting that the boys’ basketball team, having made the playoffs, requested him for prayer and to hear confessions before their first post-season game.
He also arrived early to opening night of the school musical, “Willy Wonka Jr.,” in March, to pray with the students involved in the production and help them “offer up this weekend of theater to God.”
“You can see the message in a beautiful way getting into their minds that whatever we do can be offered to God,” Father DeAscanis said.