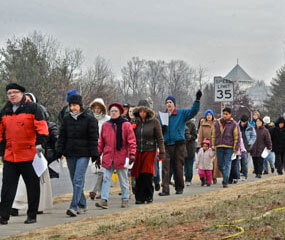 GERMANTOWN – About 700 Catholics gathered in their winter hats and coats for an early morning Mass and prayerful protest Dec. 11 outside an abortion clinic to pray for the conversion of LeRoy Carhart, a doctor who recently came to Montgomery County from Nebraska to perform late term abortions.

Washington Auxiliary Bishop Martin Holley celebrated the Mass at Mother Seton Parish, located just around the corner from the abortion clinic. Several priests and deacons also assisted the bishop during Mass. The large crowd filled the pews, leaving some to stand at the back of the church and in the aisles.

During his homily, Bishop Holley asked people to pray for the conversion of the doctor, so “life may be respected inside and outside of the womb.”

The second protest in six days at the clinic was held in between two feasts that remind Catholics to reflect on the sacred nature of life in the womb – the feast of the Immaculate Conception and the feast of Our Lady of Guadalupe, protector of the unborn.

As protestors prayerfully processed toward the abortion clinic – reciting the rosary and singing hymns – several people carried images of Our Lady of Guadalupe.

The doctor began working at the Germantown clinic Dec. 6, and he will also perform abortions at a clinic in Iowa. The Washington Post reported that Carhart chose the Germantown location based on a number of factors, including which jurisdiction had the most favorable laws for abortion.

Lopiccolo said, “Carhart, as a proponent of late-term abortions, represents the failure of Maryland legislation to protect these vulnerable children – children who, in different circumstances, would be rescued by the advances in medical science and allowed to survive outside the womb …”

She said she hopes the protest will send a message: “We are not going away, we will keep a continued presence here.”

During next spring’s 40 Days for Life campaign Lopiccolo said she plans to have people keep a constant prayer vigil outside the Germantown clinic. She also thanked the large crowd for their quick response and participation in the protest.

“Essentially what we are talking about is a doctor coming into our area who wants to openly offer abortion services up to the ninth month,” he said. “There is no justification for taking life at the ninth month.”

Father Carlos Benetiz, pastor of Mother Seton, said, “We are called now to march, to pray full of love, not full of violence.”

He added that they should refrain from judging because they are not better than the doctor, they have just been blessed and have been given many graces.

“Pray that we go forth full of mercy, full of love, full of courage,” he said.