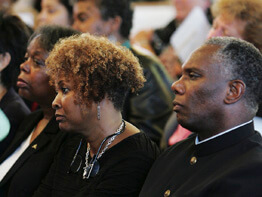 WASHINGTON – As many as 1,000 family members, friends, co-workers and community members attended the funeral Mass for slain journalist Chauncey Bailey in Oakland, Calif., at St. Benedict Catholic Church.
Father Jay Matthews, pastor, was a longtime friend of Bailey and was the main celebrant of the Mass. He said the church can seat 400 comfortably but 700 crowded in Aug. 8, with hundreds more outside, to pay their respects to a man who died trying to make their community a better, safer place to live.
Eighty members of Bailey’s family came from across the country, and the National Association of Black Journalists sent a delegation from its convention in Las Vegas. Father Matthews said Bailey, who was African-American, was a well-loved member of the community, and said it was a “very uplifting ceremony.”
Bailey, 57, was editor of the Oakland Post weekly newspaper. He was shot and killed the morning of Aug. 2 while walking to work.
Devaughndre Broussard, whom police say admitted to the shooting, was reportedly upset about a critical article Bailey was preparing to write about Your Black Muslim Bakery, an Oakland organization that helped struggling families and men just out of prison in the 1960s and ‘70s, but which has been accused of criminal activity since then. Broussard worked as a handyman for the bakery and was arrested along with six others Aug. 3.
Father Matthews called Bailey’s death a “wake-up call” for Oakland. He said in a telephone interview with Catholic News Service Aug. 10 that he hoped it would inspire the community’s leaders to take responsibility for the city’s future.
“This is the turning point,” he said. “I do not want to ever celebrate a funeral like that again. I don’t ever want to do it again.”
Oakland Mayor Ron Dellums and U.S. Rep. Barbara Lee, D-Calif., attended the service. Dellums said Bailey’s death has presented him with his greatest challenge since becoming mayor in January.
Father Matthews likened Bailey’s death to a kind of martyrdom and said he hoped it would help young people to consider making a difference through the “vocation of journalism.”
“Martyrdom, in the history of Christianity, never diminished the number of Christians; it always increased the number,” he said. “Our martyrs did not die in vain. People saw their courage and people witnessed their faith. If they could live the way they lived and die the way they died, there’s something in that, and we need to embrace that.”
Bailey’s commitment to journalism was first and foremost a belief in what his community could accomplish if he provided them with meaningful information, Father Matthews said.
“His legacy to this community is first that we must be committed to one another,” said Father Matthews, who is an African-American. “He always went after the kind of information people could understand and appreciate. The love that he had for his faith and for his community certainly came out in the work that he did.”
More than 250 people posted their photos and memories of Bailey on an online guest book in his memory. Most postings came from people in Oakland, but others came from Texas, Nebraska, New York, Pennsylvania and Nevada.
Many were colleagues from his journalism work, but many more were simply community members who expressed their appreciation and respect for his work and dedication to the community.
Before becoming editor of the Oakland Post, Bailey worked for 12 years as a reporter at the Oakland Tribune daily newspaper. He also co-founded a small cable TV station, wrote a screenplay for a film and was working on a documentary about poor communities in Vietnam, Father Matthews said.
“(Bailey) was truly a multitasker because he was so wedded to his career,” he said. “It was 24/7 for him.”
Bailey was a parishioner at St. Benedict for 18 years, and he and Father Matthews grew close over the years.
In July, both men were honored by the Black Expo at a dinner for the top 101 black men making a difference in the Oakland area. Father Matthews said he and Bailey sat at the same table that night. Father Matthews’ mother and sister were there with some members of the parish.
“He had a wonderful time that evening, being with us,” he said. “And that was just a couple of weeks ago.”