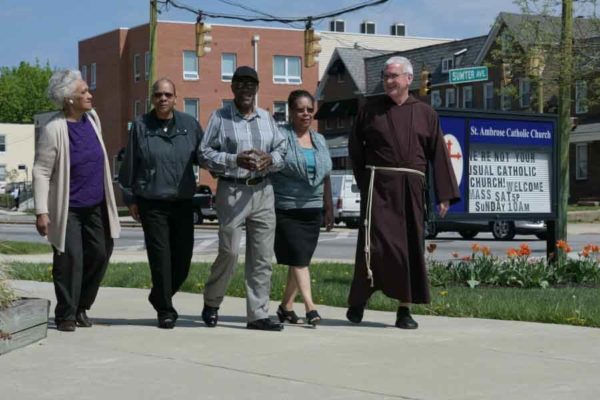 For Muriel Rice, the concept of missionary discipleship, the subject of a 32-page pastoral letter by Baltimore Archbishop William E. Lori, may be boiled down to a simple phrase: “Passing it on.”

“It’s about passing it on to everybody you meet,” said Rice, a parishioner of St. Edward in West Baltimore who participated in “Missionary Discipleship,” a program of workshops, lectures and prayer at St. Ambrose Parish in Park Heights which began in Advent 2016, ends June 4, Pentecost Sunday, and has drawn participants from the two parishes.

The “it” to which Rice referred is, of course, the Gospel, interpreted and examined by guest speakers and the parishioners themselves.

“We basically took the archbishop’s pastoral (letter) and sort of stretched it apart,” explained Capuchin Franciscan Father Paul Zaborowski, pastor of St. Ambrose. “The whole premise was for us to deepen our relationship with Christ – that’s what we were desiring, and I think it has been accomplished.”

“I like to use the word ‘renewed,’” said Gloria Jiggetts, a St. Ambrose parishioner, “because that’s how you felt through the whole process.”

Through workshops in leadership, evangelization and community outreach, and speakers and presenters including Therese Wilson Favors, former director of the Archdiocese of Baltimore’s Office of Black Catholic Ministries, and Capuchin Franciscan Father Paul Dressler, guardian of Capuchin College in Washington, D.C., parishioners began to not just understand missionary discipleship, but enact it.

“As a married couple, we were actually evangelizing each other,” Jiggetts said, nodding at her husband, Clinton Jiggetts, also of St. Ambrose. “We had a lot of dialogue, and it was pretty awesome.”

Clinton Jiggetts takes his new skills and knowledge to a men’s group he visits on Fridays.

“We evangelize in the way we treat each other,” he said. “It’s offering prayers, being kind and supporting those in need.”

Father Zaborowski said that turnout has been high; during Advent, he offered two “stop-and-go” Masses, during which he explained the liturgy while he celebrated it, due to demand.

“As a pastor, I’m so pleased,” he said. “It has built a wonderful enthusiasm in the parishes.”

Larger-scale evangelization efforts on Christmas and Easter sent parishioners into the neighborhoods surrounding St. Ambrose, for carols and to invite neighbors to church, respectively.

“We had five new people show up to Mass Easter morning,” Father Zaborowski said, adding that new arrivals are greeted warmly by St. Ambrose’s “ministers of hospitality” – “Theaters have ushers,” he said – and later receive letters from himself.

“St. Ambrose stands here, the same as St. Edward stands in Poplar Grove, and we have to give hope,” he said. When people get weary enough to come in, we have to feed them and bring them to Christ.”

“At the leadership workshop, we talked about bringing young people into it,” said Paula Cullings, a parishioner of St. Edward. “With all the technology and bright ideas young people have, they can probably take whatever we have and bring new life to it.”