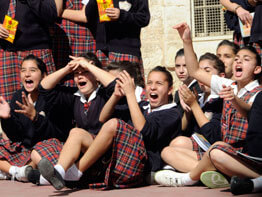 For Palestinian Christians, attending Christian schools is part of their identity, said Fuad Giacaman, general director of the Arab Education Institute in Beit Sahour. Since Muslim students also attend Christian schools, their classrooms are the perfect setting for children to learn about concepts such as tolerance and respect, he said.

Most Christian schools also include several foreign language classes, such as English, Italian, French and German, and in general demand academic excellence, he said.

Some Christian educators feel that if the possibility of Christians and Muslims learning together in an atmosphere of love and respect is lost, it will be only a matter of time until extremists who have had no contact with other segments of society take full control of Palestinian society.

“Now there is more money coming into the schools (from donations abroad), but the economic situation is worse than before,” said Mr. Giacaman.

According to a study undertaken by the Jerusalem Inter-Church Center last year, Jerusalem and the West Bank have 65 Christian schools. In 2006 the Catholic Church had the largest number, with 45 schools and more than 17,000 students throughout the West Bank and Gaza Strip.

The biggest challenge the schools are facing, said the report, is the limited ability to collect tuition fees.

For example, while the actual cost of tuition at the Coptic Orthodox school runs close to $3,000 per year, most families only pay $500 per year, said the report.

The lack of financial support and the need to subsidize the tuition compound the financial difficulty for the Christian schools, according to the report. Since the Palestinian Ministry of Education is not in a position to dispense financial assistance, the only major sources of aid to Christian schools until now have been churches and church-related organizations, the report said.

It said Christian schools do not see tuition as the means for covering costs, and most have an ongoing deficit as they attempt to subsidize tuition for needy families. The Latin Patriarchate of Jerusalem schools’ deficit has run as high as $2 million, according to the report. The Franciscan Custody of the Holy Land’s annual deficit for its five schools in the West Bank is about $1.5 million, said the report.

It suggested the local Christian churches join together in some form to emulate the work of the Vatican ambassador’s Secretariat of Solidarity for Catholic Schools, which has served to organizationally coordinate the collective fundraising efforts of all Catholic schools. The needs of Christian schools in the Holy Land are so large that they cannot be accommodated by local financial resources, said the report.

“Christian schools sometimes have no other way but to raise tuition fees while at the same time facing the inevitable results of losing more students, who are dropping out of the schools because of financial difficulties,” said the report. “Lately we have seen this phenomenon on the increase.”

Though on average Christians and Muslims are about equally represented in Christian schools, in some, such as the Anglican St. George’s School in Jerusalem, the student body is 95 percent Muslim. St. George’s is one of the few schools in Jerusalem to offer scholarships to needy students, according to the report.

Many of the Catholic parish schools where the tuition is relatively low also have a high percentage of Muslim students.