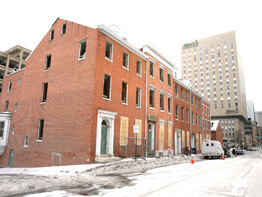 After a two month stand-off, the Baltimore Heritage has decided to withdraw its appeal and lawsuit relating to the demolition of rowhouses to make way for a new patient tower designed to better accommodate and care for patients of Baltimore’s Mercy Medical Center.

The $292 million project will also mean the destruction of historic row homes where the nation’s first black Catholic parish, St. Francis Xavier, got its start.

In a Feb. 6 statement, Mercy said, “The leadership of Baltimore Heritage felt that their lawsuit, even if successful, likely would have just delayed the demolition, and they did not want to be obstructionists. Mercy has agreed to record the buildings consistent with professional standards and to create a display in the new facility regarding the buildings and their history.”

Mercy has also agreed not to demolish the buildings until it has completed its necessary photographic records.

“The buildings are rare examples of early 19th century Baltimore and very significant to the African-American history of the city,” said Tyler Gearhart, executive director of Preservation Maryland and chair of the Baltimore Commission for Historical and Architectural Preservation. “I’m disappointed that demolition appears to be imminent, especially given that there are design alternatives that could both preserve the buildings and meet the expansion needs of the hospital.”

Kathleen Kotarba, executive director of Baltimore’s Commission for Historical and Architectural Preservation, said these 1820s row homes are the oldest and most intact residential structures in original downtown Baltimore.

Ms. Kotarba said many prominent people, especially in the black community, lived in the row homes. The historic St. Francis Xavier, now located on Caroline and Oliver streets, began in one of the homes before moving to its larger location.

According to a Nov. 27 statement from Mercy, external consultants reached the conclusion, in 2004, that the hospital’s existing inpatient tower building could not be renovated to accommodate the hospital’s future needs.

Furthermore, three nationally-renowned architects and the external consultants “independently concluded that the building’s new site must be immediately adjacent to existing facilities such as materials management and the emergency department to maintain operational efficiency.”
The hospital is seeking to begin work on the tower, which is scheduled to open in the spring of 2010, as soon as possible.

Mercy will also demolish its “aging” Pleasant Street garage and is in the process of building a replacement garage with 900 additional spaces at the corner of Guilford Avenue and Pleasant Street.
“Guided by the Sisters of Mercy, who began their healing ministry on the same location in 1874, the hospital’s leadership remains dedicated to strengthening the sisters’ mission to care and serve the people of Baltimore,” said the Nov. 27 statement from Mercy.