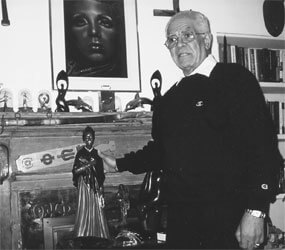 A memorial Mass for Hilbert Dennis Stanley, former executive director of the National Black Catholic Congress and a prominent educator, was to be offered Feb. 26 at 7 p.m. at St. Bernardine in Baltimore. Stanley died Feb. 12. He was 78.

Stanley, who converted to Catholicism while a student at Morgan State University, was a parishioner of St. Bernardine for 35 years.

“His enthusiasm that he brought to gatherings of black Catholic ministry was considerable,” said Monsignor Edward M. Miller, pastor of the Baltimore City parish. “He also arranged tremendous resources for continuing education. He just sparkled there every year. He would bring in speakers, authorities from other fields.”

Therese Wilson Favors, director of the Office of African American Catholic Ministries for the Archdiocese of Baltimore, had known Stanley for some 25 years and described him as “very involved.”

“He was always a very dedicated worker in so far as trying to make the church be seen in a positive light, a place where black people could feel welcome and at home,” she said. “In that respect he often challenged policies where he saw racism rear its ugly head.”

Stanley grew up in Easton and graduated from Robert Moton High School at the top of his 11th-grade class, which at the time, was the highest grade black students could complete.

While serving in the U.S. Army, where he attained the rank of major, Stanely married the former Constance Bower, a fellow Morganite, who preceded him in death.

Upon leaving the military, Stanley began a career in education with the Baltimore City Public Schools System. He rose through the ranks as teacher, department head, special assistant, assistant principal and principal of Lake Clifton, Edmondson and Southwestern High Schools.

Less than a week into his retirement from the school system, Stanley began working with the National Black Catholic Congress. Appointed executive director of the organization from 1991-2002, he was responsible for coordinating training programs with 130 Catholic dioceses in the United States and all Catholic parishes serving persons of African descent. Stanley was awarded a papal honor as a Knight of St. Gregory the Great, by Pope John Paul II. Stanley was instrumental in the planning and construction of the Our Mother of Africa Chapel at the Basilica of the National Shrine of the Immaculate Conception, in Washington, D.C. He organized a pilgrimage in 2000 to Rome for the canonization of the first African woman, St. Josephine Bakhita.

Stanley took on many leadership roles at St. Bernardine, including the immediate past parish council president. He served on the usher board and was a member of the Gold Dome Club. He has said many times that his church family has been a blessing in his life.

Stanley remained loyal to his alma mater, serving as the President of the National Alumni Association, its treasurer and on the association’s board of directors for 20 years. Among numerous awards and honors, Stanley was inducted into the Morgan State University Alumni Hall of Fame as a charter member in 1998 and was elected to the Hall of Fame of the National Alliance of Black Educators in November 2000.

He has served as a member and officer in countless local and national organizations, including the Knights of Columbus and Knights of St. Peter Claver and served on the board of Christian formation for the archdiocese. Favors said Stanely, who served on the board of trustees for the Baltimore City Historical Society, loved history and “followed it to the nth degree.”

“Everyone was important to him,” said Monsignor Miller. “He had a doctorate, but he was not above everybody else. He saw himself as one of the people in the pews.”