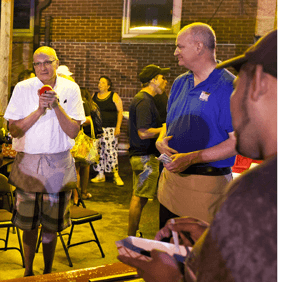 By Elizabeth Lowe
elowe@CatholicReview.org
Twitter: ReviewLowe
Sacred Heart of Jesus–Sagrado Corazón de Jesús in Highlandtown is flourishing one year after becoming a bilingual parish.
The East Baltimore church transitioned on the first weekend of August 2011 from an English-only parish to an English- and Spanish-speaking parish. Parishioners of St. Michael in Fells Point and Spanish-speaking parishioners from Our Lady of Pompei, also in Highlandtown, relocated to Sacred Heart of Jesus.
“There’s a lot more positives than bumps in the road,” said Redemptorist Father Robert F. Wojtek, the bilingual pastor of Sacred Heart of Jesus. “Maybe I was expecting worse. It’s just taking one day at a time.”
Father Wojtek had been pastor of St. Michael and St. Patrick, also in Fells Point. St. Patrick, which sustained earthquake damage two weeks after the transition and was closed for five months, is now a mission of Sacred Heart of Jesus.
When it was announced in February 2011 that St. Michael, a bilingual parish, would close, Father Wojtek recalled that he said to parishioners, “I’m going over and I don’t want to be alone, so let’s go over together.”
“One of the things we kept saying is that the church is more than the building,” Father Wojtek said, “it’s the people.”
Baltimore Auxiliary Bishop Denis J. Madden said the merger has “gone remarkably well.”
“Thanks to the leadership of Father Wojtek and Father Jerry (Knapp) … and the Redemptorist community in general and most especially to the Hispanic community, it’s just a very, very exciting time,” Bishop Madden said. “It seems as if the community has become a tight community worshiping.”
Prior to the reconfiguration, Father Wojtek said a total of 300 people attended the three weekend Masses at Sacred Heart of Jesus.
Now, the parish has 1,577 registered families, and parishioners with roots from approximately 15 countries, Father Wojtek said.
“I think that with time and getting to know people better, that sense of community (grows),” Father Wojtek said. “You look around and see someone you know and feel at home. That’s certainly something that’s going to take time.”
In the past year, the number of children enrolled in religious education classes at the parish has more than doubled, said Father Wojtek, who expects 500 children to receive instruction this year.
Other changes include the formation of an adolescent youth group; additional fellowship gatherings after Masses and fresh blood involved in the planning of the annual parish carnival in June.
A chapel was also created at the parish. With four pews, an altar, tabernacle, crucifix and monstrance from St. Michael, it is open for eucharistic adoration on Saturdays.
“It’s just a blessing for the parish,” Father Wojtek said of the small chapel.
Archbishop Borders School, which operated at Our Lady of Pompei Parish, has relocated to the vacant school building at Sacred Heart of Jesus. It will open at its new location Aug. 27 for the 2012-2013 school year.
The pre-K through eighth-grade school is the first dual-language school in the archdiocese, which aims to make students fluent in English and Spanish.
The school’s new location is a “win-win” for the parish and the school, said Father Wojtek, who noted “I’m hoping to be over there and have a presence. It’s a good thing for sure.”
Ron Balcer, a parishioner of Sacred Heart of Jesus who had been a parishioner of St. Michael for 65 years, volunteers at the parish five days a week. A member of the transitional pastoral council, he said the merger “has brought new life into Sacred Heart.”
“It’s a very similar parish, in many ways, to St. Michael,” Balcer said. “The closing of St. Michael after 60 some years (as a parishioner) was quite traumatic, yet I believe that I can serve the Lord here as well as at St. Michael. If that’s what you (Jesus) want me to do, I’ll do it.”
Copyright (c) Aug. 9, 2012 CatholicReview.org
PrevNext