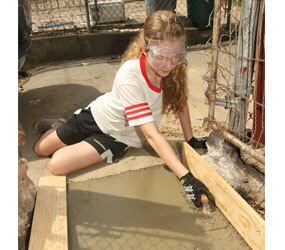 As the daughter of a special needs teacher, Jamie Hutcheson has always been interested in helping children and those in need.

During the last two summers, she has traveled with the family of Katie Perry, a fellow Seton Keough High School student, to El Salvador. The Perrys have organized work camp groups that have gone to the impoverished country to serve the educational and social needs of its people.

“It’s so sad when you’re down there, but you feel like you’re making a difference,” Hutcheson said.

Service to others is a pillar of Catholic schools around the archdiocese. Students chose to spend their summers assisting the poor in local communities, other U.S. states and international villages. They went with parishes, private groups and high schools workcamps

While some in the Perry group assisted in building a child care center, others worked directly with the children of El Salvador.

Hutcheson played with the children, worked on puzzles and taught them how to make crafts.

“They really just enjoy people spending time with them,” she said. “They just do what you want to do with them.”

Eleven students from Baltimore’s Institute of Notre Dame traveled to New Orleans in June to help rebuild home destroyed in Hurricane Katrina. They went to Mass and sat amongst people affected by the hurricane.

“It interested me because it involved a face-to-face experience with people who needed help and I had never had that experience before,” junior Kaitlyn Krall said. “Meeting our homeowner really made me understand that people do rise from disaster …”

John Carroll student Shannon Olsen traveled with four classmates and other archdiocesan Catholics to Terra Alta, W.Va., an Appalachian community. She is a second generation contributor, as her father worked in the community when he was younger.

“The family was so friendly and kind to us,” Olsen said. “We connected and I feel that I really saw God in the family that I helped. This experience touched my heart and I plan to go back to work camp for years to come.”

Some campers worked on houses, while others helped renovate a learning center for people with special needs. They interacted with people who benefit from its services.

Malone said he is hooked on helping others.

“I think it’s important because there are people who need help,” Malone said. “Jesus said to help the weakest of society, so it’s natural for Catholics to feel the need to do service.”