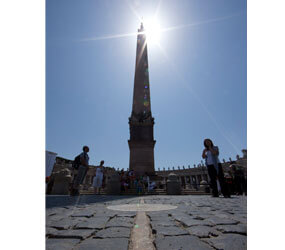 VATICAN CITY – Hidden among the paving stones of St. Peter’s Square there is a simple clock and calendar. All you need is a sunny day.

The 83-foot stone obelisk in the middle of the square acts as a sundial that can accurately indicate midday and the two solstices thanks to a granite meridian and marble markers embedded in the square.

Pope Benedict XVI proudly pointed out the hidden timepiece during an Angelus address he gave on the winter solstice a few years ago.

“The great obelisk casts its shadow in a line that runs along the paving stones toward the fountain beneath this window and in these days, the shadow is at its longest of the year,” he told pilgrims from the window of his library.

A long, thin granite strip running from the obelisk toward the pope’s window and through one of the fountains acts as the meridian: a line that indicates when the sun has reached true or solar noon and is at its highest point in the sky.

The pope, in his solstice soliloquy, reminded people that the church has always been keenly interested in astronomy to help guide and establish fundamental liturgical days and the times of prayer such as the Angelus, which is recited in the morning, at noon and in the evening. While sunrise and sunset are easy to figure out, sundials could accurately tell midday, he said.

Even when early mechanical clocks were introduced, they were a luxury item for a few and not always accurate, so using the sun to mark true noon was an important backup.

In the 18th-century, Pope Clement XI decided to create an official reference point for telling time in Rome. He commissioned astronomer Francesco Bianchini to build a meridian inside Michelangelo’s Basilica of St. Mary of the Angels and Martyrs.

The basilica’s elaborate meridian was meant to do much more than mark midday; it was built to make highly accurate celestial observations and solve complex astronomical problems, said a U.S. historian of science.

John Heilbron, emeritus professor of history at the University of California, Berkeley, told Catholic News Service that St. Mary of the Angels “could do things you couldn’t do with telescopes at the time” like find out precise information about the inclination of the Earth’s axis.

Heilbron, who wrote “The Sun in the Church: Cathedrals as Solar Observatories,” said the basilica’s meridian was also used “to establish a very good value for the length of the year.”

Pope Clement wanted to verify the accuracy of the Gregorian reform of the calendar and its calculation of Easter, which had still not been widely accepted among the Protestant churches at the time.

The real problem for the church was “how to compute the moons which are essential for the determination of Easter,” said Jesuit Father Juan Casanovas, a solar astronomer and historian of astronomy.

The Council of Nicea tackled the problem in 325 and interpreted the Mosaic rule by defining Easter to be observed on the Sunday that followed the first full moon after the vernal equinox on March 21.

However, there were still complicated tables involved in calculating Easter because the Julian calendar used at the time was no longer in sync with the seasons.

The Gregorian reform got rid of 10 days to bring the vernal equinox back to the traditional date of March 21, Father Casanovas told CNS.

However, the Orthodox Church did not accept the pope’s authority nor his calendar. Still today the Orthodox Church uses the Julian calendar for religious functions, resulting in the Eastern date for Easter usually falling later than the Western date though occasionally the dates coincide.

While Pope Gregory XIII’s reform of the calendar in 1582 was not perfect, it is still easy, practical and almost universally accepted in civil society today, Father Casanovas said.

Calendars will never be perfect because “a calendar deals with whole days, not fragments of hours, seconds and thousandths of a second so you have to be ready to add one day or remove a day from the calendar now and then,” he said.

Having a leap year has been successful but “it’s not enough. There is still a little error and after centuries it accumulates,” he said. The calendar is expected to gain a day by the year 4500.

There have been many proposals to get the world synced to one perpetual calendar, but perfection and accuracy would come at a price.

For example, a seven-day week doesn’t work well mathematically, the astronomer said, because “if you divide the number of days in a year by seven, there is one day left and with a leap year there are two days left.”

But no one wants to meddle with the seven-day week, he said.

The Hebrew, Muslim and Gregorian calendars – even though they are radically different – are all based on a seven-day week as reflected in Genesis’ account of the number of days of creation. “It’s a sacred number,” he said.

Heilbron said attempts to further reform the calendar by making it more rational are not only unsuccessful, some proposals have been downright “nuts.”

The most extreme being the French revolutionary calendar, which had three 10-day weeks in a month, 100 minutes in an hour and 10 hours in a day, he said.

“In calendrics, precision and perfection should not trump practicality,” he said.

The imperfect marking of time “is just too deeply engrained in our social life,” he said.