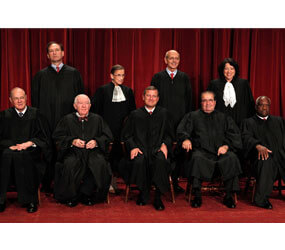 WASHINGTON – The U.S. Supreme Court has left standing a lower court ruling that will allow an Oregon man to try to hold the Vatican financially responsible for his sexual abuse by a priest, if he can persuade the court that the priest was an employee of the Vatican.

By declining to take Holy See v. John Doe, the court June 28 left intact the 9th U.S. Circuit Court of Appeals ruling that said because of the way Oregon law defines employment, the Vatican is not protected under the Foreign Sovereign Immunities Act from potential liability for the actions of a priest who Doe, the unidentified plaintiff, said sexually abused him in the 1960s.

The case will now go back to U.S. District Court, where Doe’s attorneys will attempt to prove that the late Andrew Ronan, a former Servite priest who was laicized in 1966, was a Vatican employee at the time the events took place.

In order for the District Court to have ruled that the case could move forward, a lower standard of having adequately “pleaded” a connection between Ronan and the Vatican had to be met. Before the issue of liability of the Holy See can be addressed, Doe’s attorneys will have to persuade the court under a higher standard “proving” that Ronan was a Vatican employee.

In other actions on the final day of the 2009-10 term, the court upheld a 9th Circuit ruling that said the University of California’s Hastings College of Law may exclude the Christian Legal Society from campus benefits.

The school had denied campus recognition to the group because the club requires that its voting members sign a statement of faith that rejects “unrepentant participation in or advocacy of a sexually immoral lifestyle.” The school said that requirement is inconsistent with a campus policy barring recognition to groups that exclude people because of religious belief or sexual orientation.

The session also was the final day on the bench for Justice John Paul Stevens, 90, who announced his retirement this spring.

The Oregon case involves the efforts of Doe to get compensation from the Vatican for sexual abuse he said was committed by Ronan when he was assigned to St. Albert’s Parish in Portland, Ore. Ronan admitted to abusing boys in the Archdiocese of Armagh, Ireland, and while assigned at St. Philip’s High School in Chicago, before he was posted to Portland. Ronan died in 1992.

When the case returns to the District Court, Doe must first prove that Ronan was an employee of the Holy See. Should that standard be met, the case will hinge on proving that the Vatican is liable for Doe’s abuse by ignoring Ronan’s history of abusing minors and moving him from place to place.

In a second case over liability for the sexual abuse of three men in Kentucky, papers filed in U.S. District Court in Louisville on behalf of the Holy See June 24 argue that there is no legal link between the Vatican and priests who served in Louisville decades ago. That case also revolves around whether the Holy See can even be taken to court in the matter, or if it is protected under the Foreign Sovereign Immunities Act.