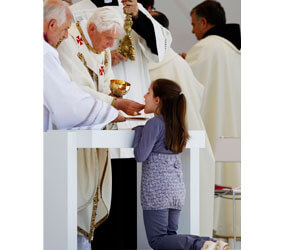 It also fools people into thinking their real worth lies in their social or personal standing and their ability to control reality, he said during a one-day visit June 19 to the Republic of San Marino, a tiny nation completely surrounded by Italy.

Like many Western nations, San Marino today faces many difficulties and challenges, the pope said in his homily during a Mass held at an open-air stadium.

Such difficulties are caused most of all by “hedonistic models that cloud the mind and risk quashing morality altogether,” he told some 22,000 people in attendance, which included people who came from surrounding Italian cities.

“The temptation has crept in that says man’s richness is not faith, but his personal and social power, his intelligence, his culture and his ability to scientifically, technologically and socially manipulate reality,” he said.

Despite its deep roots in Christianity and that the population of about 31,800 is predominantly Catholic, even San Marino has seen religious faith and Christian values being usurped by other “presumed riches, which in the end, turn out to be inconsistent and unable to support the great promise of the truth, the good, the beautiful and the just, which, for centuries, your forefathers identified with the experience of faith,” said the pope.

The crisis families are experiencing, too, is “worsened by the widespread psychological and spiritual fragility of couples,” he said.

The pope called on the church to promote a Christian way of life and asked all citizens to step up to the challenges of present day by tapping into their country’s “precious deposit” of Christian values and traditions.

Reciting the Angelus after Mass, Pope Benedict also called for increased help for the millions of refugees around the globe; the United Nations marked World Refugee Day June 20.

The pope recalled this year marked the 60th anniversary of the U.N. High Commissioner for Refugees, which watches over “all those who are persecuted and forced to flee their own countries.”

The pope called on government officials around the world and people of good will “to guarantee refugees are welcomed and live in dignified conditions as they wait for when they can return home freely and safely.”

According to the UNHCR, there are some 42 million people around the globe who have been uprooted from their home country. Many of them face shortages or a complete lack in the basic essentials for survival and to improve their lives such as inadequate shelter, food, water, health care and education.