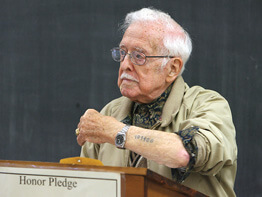 BEL AIR – Georges Selzer stood naked in the snow as guards at the Auschwitz death camp in Nazi-occupied Poland tattooed a camp number on his left forearm: 101100.

Standing at a podium more than six decades later, the 95-year-old Jewish Holocaust survivor calmly unbuttoned and rolled up his left sleeve to show some 30 students at The John Carroll School in Bel Air the deep purple digits that remain emblazoned on his body and in his soul.

“I think it’s my lucky number,” the white-haired man said wryly during the Nov. 29 assembly sponsored by John Carroll’s Russian club. The numbers on his arm have an unusual combination of threes: three “1s” and three “0s” that add up to three.

Mr. Selzer believes it’s more than luck that helped him make it through the horrors of the Second World War. His faith in God and his willingness to put hate aside was a big factor in surviving, he said.

More than once, Mr. Selzer was on the verge of being killed by the Nazis. He remembered being outraged when a Nazi guard punched a fellow prisoner in the face. A former boxer, Mr. Selzer came to his friend’s defense – knocking out the guard, who hit his head when he fell and later died from the injury. Although sentenced to hang for his actions, Mr. Selzer escaped death when he was transferred to another camp.

“The good Lord was with me,” he said.

In an earlier incident, Mr. Selzer said he was in line to be shot but was rescued by a German captain who admired the young man for being proud of his Jewish heritage.

Mr. Selzer didn’t always have a strong faith in God. He was agnostic until he decided to ask God for help when he was starving in Nazi hands.

“I prayed to double the (food) portion we received,” he said. “The next day, my bread had two pieces stuck together.”

Although Mr. Selzer lost his parents and his family to the Nazis and although he suffered numerous indignities, including a broken bone from a kick to the shin, the former member of the French Foreign Legion said he holds no hate in his heart.

“Hate is a disease,” said Mr. Selzer, who survived a variety of concentration camps and was forced to work in a cement factory in the former Czechoslovakia.

“To hate is a sin and if you hate somebody, you hurt no one but yourself because it eats you inside,” he insisted.

Nick Temple, a 14-year-old sophomore, said he was touched by Mr. Selzer’s message of love and forgiveness.

“It’s incredible to hear these stories,” said Nick, a member of Temple Adas Shalom Synagogue in Harford County. “I’m not sure I could go through the things he did and have the same outlook on life.”

Mr. Selzer, who has lived in Baltimore since 1952, has given presentations on his life experiences for more than 20 years at John Carroll. Because of his age, this year’s was his last presentation.