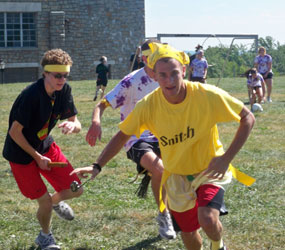 The activities director for Mount St. Mary’s University was watching YouTube videos a few years ago and stumbled upon one in which Harry Potter fans were playing Quidditch, the game made famous in the series of books and movies.

He marveled at how the video’s stars translated a fantasy game, in which witches and wizards fly on broomsticks, so mere muggles (non-magic users in the “Potter” world) could play in a more earth-bound fashion.

“How hysterical,” he thought, “would it be if college students were running around on broomsticks?”

That notion became a reality this fall on the Emmitsburg campus, where four teams of 10 students each played in a one-day Quidditch tournament organized by McVeary’s office.

“I think,” McVeary said, “there definitely were people who said, ‘this is going to tank.’ Even the people who were fans were skeptical.”

Spectators saw sophomore Charles Mays run throughout campus as the elusive Snitch, normally a winged ball in the “Potter” series, avoiding seekers. Classrooms and cafeterias were the perfect places to hide.

Other team members had to throw a ball through a hoop-like goal. McVeary found that rules were plentiful, but already understood by most players.

“We delivered something that speaks to them,” he said. “It got a really neat cross-section of students,” he said.

They aren’t the only ones catching Quidditch fever. New York hosted the fourth annual World Quidditch Cup earlier this month, drawing 46 teams and hundreds of players.

The Mount St. Mary’s tournament was such a success, some on campus want a spring version.

“The students loved it,” McVeary said. “I’m personally amazed how successful it was.”

The first part of the final movie in the Potter series, “Harry Potter and the Deathly Hallows,” opens in movie theaters around the country Nov. 19.

The first bestselling Potter book, “Harry Potter and the Sorcerer’s Stone,” debuted in the U.S. in 1998. The story follows an English boy who is unknowingly the most important figure in magic history. Over seven parts, culminating in “Deathly Hallows” three years ago, young readers followed Potter’s journey toward a final showdown with the evil Lord Voldemort.

A film version of Sorcerer’s Stone arrived in 2001 and five others followed in theaters. While “Deathly Hallows Part 1” bows Nov. 19, “Part II” is expected to be released July 2011.

The sixth entry, “Harry Potter and the Half-Blood Prince,” received four stars from L’Osservatore Romano, the Vatican’s newspaper, which praised it for promoting “friendship, altruism, loyalty and self-giving.”

Some people have been skeptical of the series’ emphasis on witchcraft and apparent lack of God, but the newspaper said the series makes a clear distinction between good and bad.

Each of the Potter movies has grossed at least $250 million domestically.

Baltimore’s Maryland Science Center, home to the state’s only classic IMAX screen, sold out its Nov. 19 midnight screening three days after advance tickets went on sale. The screen is five stories tall and 75 feet wide and was recently bolstered by new light bulbs for a crisper color saturation.

Chris Cropper, senior marketing director for the science center, said staffers expect most of opening weekend shows in the 390-seat auditorium to be near sellouts.

The science center will host a Harry Potter day Nov. 20, complete with a special planetarium show featuring what the sky looks like above Hogwarts Castle, potion workshops and a sorting hat to tell people their Potter “house.”

Cropper said the Science Center intends on a four-week run of “Deathly Hallows,” but will extend it “if that’s what our audience wants.”

He knows there is a young audience ready to see if Harry Potter can defeat evil in “Deathly Hallows Part 1,” even though many read how it ended three years ago.

“I have a 13-year-old who grew up with Harry Potter,” Cropper said. “These are enormously popular books. So many kids have discovered reading because of this series.”

McVeary said about 300 Mount St. Mary’s students, via his office, were planning on attending a midnight screening at a local theater Nov. 19. For some, it will be the beginning of the end of their childhood.

“This is something they’ve grown up with,” McVeary said. “It’s almost part of their makeup. We realize this is a big part of this generation.”

What did Matt Palmer think of “Deathly Hallows?” See his review at CatholicReview.org/palmerblog midnight Friday.