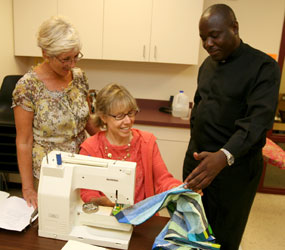 In late August, a historic earthquake left a small crack in the steeple at Our Lady of Perpetual Help in Edgewater, before Hurricane Irene damaged property of the church and that of many of its parishioners.

A more recent visitor from the Caribbean, however, put things in perspective for the parish in southern Anne Arundel County.

Our Lady of Perpetual Help is among 18 churches in the Archdiocese of Baltimore which have adopted a sister parish in the Diocese of Gonaives, Haiti. Father Laneau Nicolas was in Edgewater Sept. 9-13, extending his appreciation to Father Joseph J. Cosgrove and his congregation for all they have done for his at St. Elizabeth of Hungary in Perodin, Haiti.

“I’m just a representative of the parish,” Father Laneau said. “It’s the parish behind me that benefits from the association.”

His French was translated by Suzanne Cooley, a transplant from Quebec, member of Our Lady of Perpetual Help’s Haiti committee and the wife of Edgewater Deacon Stephen H. Cooley.

OLPH held its Haiti Festival Sept. 11, in its Marian Hall. Father Laneau talked to The Catholic Review Sept. 9, during a stop at nearby Holy Family in Davidsonville, where the “Sew Time” ministry lent its talent to the Edgewater outreach in the form of more than 60 dresses for Perodin schoolgirls.

Father Laneau and Cooley had begun the day with a stop at School of the Incarnation in Gambrills.

“There are four computers in one class,” Father Laneau marveled at Incarnation’s facilities. “There is no electricity in our school.”

Perodin is approximately 30 miles due east of St. Marc, the base of operations for Baltimore’s Haiti project, the home of the Good Samaritans School and the new James Stine College, both the inspiration of Deacon Rodrigue Mortel, director of the Missions Office for the archdiocese and a native of that town.

When Father Cosgrove moved from St. Peter in Hancock to Our Lady of Perpetual Help in 2006, he brought his former parish’s passion for Haiti. A year later, when Father Cosgrove, Cooley and Richard Howard made an exploratory trip to Haiti, it was a bumpy ride Petite Riviere de L’Artibonite, then two hours on foot to reach the mountain village of Perodin.

The January 2010 earthquake outside Port-au-Prince claimed the lives of tens of thousands in the most impoverished nation in the Western Hemisphere. Father Nicolas has since lost parishioners to a cholera epidemic and mudslides, the latter turning that two-hour hike into what is sometimes a nine-hour ordeal.

“Father Laneau,” Cooley related, “says that God gave him two strong legs, and that he uses them. You can’t get to certain areas he ministers in a jeep. In some areas, you can’t even get there by horse.”

According to Cooley, OLPH annually sends $5,000 to Perodin to feed its children. It has also sent $5,000 to supplement teachers’ salaries, and helped its sister parish purchase a new truck, a generator, solar panels on the rectory and 20 barrels to collect rain water.

“Three sisters (of the Carmelite Sisters of St. Therese of the Infant Jesus) teach a three-year home economics program to young ladies in Perodin,” Cooley said. “Our parish gave them money to purchase five sewing machines. They had to take them apart in St. Marc, and transport them with a technician, to be reassembled.”

The recent Haiti festival, a special collection and poor box donations brought an additional $4,000 for the OLPH outreach. Its next fundraiser is a Jan. 28 Casino Night at the Knights of Columbus Annapolis Council 1384 hall in Edgewater.

“You talk to every pastor in the Archdiocese of Baltimore whose people have reached out to Haiti,” Father Cosgrove said, “and they talk about the good things it brings to their parish. It’s a wonderful experience, especially for young people.”

The Archdiocese of Baltimore’s annual “Gala of Hope” for Haiti will be held Oct. 29, at Marriott Hunt Valley Inn. For more information, call 410-547-5498.