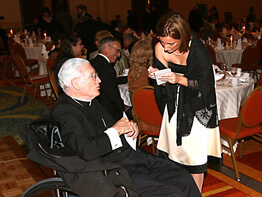 Kathleen Crocken won $525 during the 50/50 raffle at the annual Gala of Hope on Oct. 21. No sooner was the money in her grasp that she handed it right back to Deacon Rodrigue Mortel, M.D., who serves as director of the Office of the Propagation of the Faith and the Baltimore/Haiti project for the Archdiocese of Baltimore.

To the parishioner of the Ebenezer United Methodist Church in Woodbine, it was more important to feed children in the Diocese of Gonaives than to have some extra cash.

“I didn’t feel like it was my money. I felt it was for the children,” said Ms. Crocken. “I can’t imagine children going to school and not having anything to eat.”

Ms. Crocken was not the only one to donate – some 350 people who attended the gala and even those who weren’t present, contributed more than $70,000. Some $42,000 will provide food for nearly 3,000 hungry children in six parishes in the Diocese of Gonaives which have not yet been assigned a sister parish in the Archdiocese of Baltimore.

“My heart bleeds for all children,” said Samuel Chairs Jr., a parishioner of Our Lady of Perpetual help, Ellicott City, whose sister parish is Our Lady of the Nativity in Verrettes, Haiti.

“They need support more than anyone else.”

Some $20,000 will support human development programs throughout the Diocese of Gonaives, and Deacon Mortel has set aside $8,000 for Archdiocese of Baltimore youth who will be participating in a summer camp in Haiti in July.

“The future of any child is in education and faith for their future in heaven,” said Darlene Stojack, a parishioner of St. Ann, Hagerstown, whose sister parish is St. Claire in Dessalines. “That’s what the school in Haiti is doing, educating the children and giving them faith to get to heaven.”

John O’Donnell, who attended the Gala of Hope for the past two years, helped get his parish of St. Agnes, Catonsville, involved in the sister parish program. St. Agnes adopted Ss. Peter and Paul in Desdunes, and on two different occasions the pastor of Ss. Peter and Paul, Father Nicholas Vitesse, spoke to parishioners of St. Agnes about the needs of the people and what they as a community can do to help.

“I don’t know what struck me but I felt I had to help,” said Mr. O’Donnell.