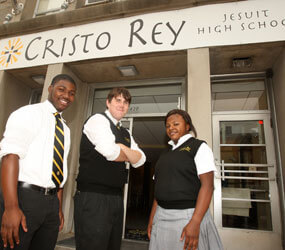 His son Steven is a member of the Class of 2011 at Cristo Rey Jesuit High School, which will be the first to graduate from the three-year-old venture in the city’s Fells Point neighborhood.

“I’m just so thankful that he had the opportunity to get in and be part of this first class,” Mullens said. “Now I just want him and all the rest of the kids down there to fulfill what God has for them. I get emotional because I never had that opportunity like he’s had. This is an opportunity from the Lord.”

Based at the old Holy Rosary School, Cristo Rey is part of a national network of 24 schools that operate under the motto “Transforming Urban America One Student At A Time.”

Students are city residents and spend five days a month working at businesses like The Johns Hopkins Hospital and M&T Bank to defray costs of tuition.

Cristo Rey opened in 2007 with 121 freshmen. That class has been whittled to 81 rising seniors, but Cristo Rey expects to have more than 320 students enrolled in all four grades when its doors reopen Sept. 2. It is the first time the school will have freshmen through seniors.

As the 2010-11 school year progresses, The Catholic Review will chronicle the educational journey of the senior class at Cristo Rey, from their background to clearing a higher educational bar, from the college application process to acceptance letters and graduation.

As its students have grown, so has Cristo Rey. Its new Harry and Jeanette Weinberg Academic Center will be unveiled in September. Located in space once occupied by the Holy Rosary convent, it is one more indicator that the Jesuit initiative is taking root.

“Our first class really does reflect the ethnic, racial and religious diversity of Baltimore City,” he said recently. “When you look at them now, they know they’re the top class.”

Before Father Swope was appointed president, the Cristo Rey network commissioned a feasibility study to make sure the city was the right fit for a new school. He and principal Tom Malone then had to recruit students and staff, selling them on the work-study concept.

“The operative expectation was that we would have a stampede of families trying to get their kids in the program,” Father Swope said. “That was not the case.

“That certainly says something good about our parents. They knew they were taking a risk by joining because it was a brand-new idea. They took a chance on us. I’m grateful they did.”

Those families have been the foundation of the blossoming school.

Malone, a former teacher at Maryvale Preparatory School, said the school’s Jesuit mission was a major attraction for him. Students are thriving, he said, under the Cristo Rey model.

“I’m constantly impressed by their (students’) spirit and their determination to make this work” Malone said. “You get to participate in a learning adventure with the kids. You’re learning about how to get a school tailored to meet needs, but at the same time a school that will hold high standards, so that kids aren’t just having needs met, they’re challenged to grow beyond where they thought they could be.”

Decisions, decisions
While Laura Harpool sounds like most 17-year-olds as she discusses uncertainty about a potential major in college, just getting to her senior year is a point of pride.

“It means success,” Harpool said with a wide smile as she sat in one classroom. “A lot of people left Cristo Rey and they regret it. To stay here at Cristo Rey where they encourage us to be better, and to be a senior, is a good achievement. I hope I can go further.”

Lucy Neale Duke, the school’s director of college counseling, has been gearing the students toward post-high school decisions for years, with regular education meetings with families about colleges and universities. College fairs are a major event for students, many of whom come from families with no college background.

“I think some of our students are getting to understand there are some great opportunities out there,” Neale Duke said. “They just saw all these schools interested in them. It’s exciting.”

Gary Spratley Jr., another senior, has been thinking about the past as much as the future. He grew up in a city neighborhood where locals sometimes make fun of his school uniform. Cristo Rey, he said, is like a home he will miss once he graduates and goes to college.

“To me, it’s all a blur,” Spratley said. “You hear your teachers and mentors say ‘High school’s going to go fast.’ It seems just like last week we were started ninth grade and now we’re becoming seniors.”