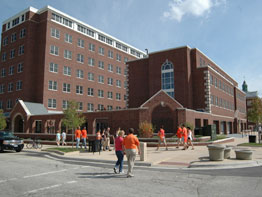 Involvement in those centers is growing, prompting some of them to renovate or expand their facilities or even build new centers to accommodate the boost in students’ interest.

“I have witnessed this great resurgence within the last 20 years, and especially the nine years since I have been with the Catholic Campus Ministry Association,” said Father Martin O. Moran, a priest of the Diocese of Harrisburg, Pa., who is executive director of the Cincinnati-based association.

“Campuses are looking to accommodate this increase in student interest, looking ahead for more space on campus and working with their bishops,” he told Catholic News Service in a telephone interview.

One school with plans for its Newman Center is the University of Buffalo, N.Y., which is embarking on a “Centering Our Community” campaign in March.

Yale University in Connecticut renovated its St. Thomas More chapel and residence center this fall in a $5 million project.

At the University of Wisconsin-Oshkosh, improvements in the Newman Center include developing a facility that conserves energy by using recycled materials, an advanced heat-exchange system, a system to capture storm water and windows that will reduce lighting needs.

But the best examples of how Newman centers are growing to accommodate students can be seen at the University of Illinois-Champaign and Arizona State University in Tempe.

In August, the renovation of St. John’s Catholic Newman Center at the University of Illinois was completed. The center, now in its 80th year, serves a campus Catholic population of more than 10,000.

The center’s “Opening New Doors” campaign raised money through private contributions and the sale of 30-year bonds to pay for the $40 million project, which produced a 200,000-square-foot complex, the largest Newman Center in the country.

It includes a new residence hall that houses almost 600 students, doubling its previous capacity; the original dorm had a waiting list of nearly 200 students. Right now the new seven-story dorm is the only Catholic residence hall at a non-Catholic college.

“So many dreamed and sacrificed to make this happen,” said Bishop Daniel R. Jenky of Peoria, Ill., the diocese in which the university is located.

“May this be a house built of living stones with Jesus as the cornerstone,” he said at a September dedication Mass.

“We saw more students looking for a Catholic community … with Bible studies, choir groups, spiritual direction on a weekly or monthly basis, and service and justice opportunities, and we are ministering to the spiritual, mental, and social needs of this community,” said Mark Randall, director of institutional advancement at St. John’s Catholic Newman Center.

Because of an increase in the number of students and staff over the last 10 years, Arizona State University’s All Saints Newman Center is set to construct a “home away from home” for students with its “Prepare Him Room!” campaign.