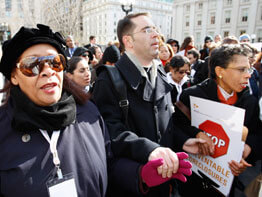 WASHINGTON – Berenice Ramos never thought she and her family would have their house lost in foreclosure.

Mrs. Ramos, 39, is a financial planner. “What about that, huh?” she said as she shook her head. Her husband has been in the flooring business for 20 years. Ramos herself took in additional income cleaning houses.

“This was our third house,” she told Catholic News Service about the house where she and her husband and three children lived for three years until it was foreclosed on in November.

The family now rents a house two blocks from the home they lost. Asked if she knew others whose homes have gone into foreclosure, Mrs. Ramos replied, “Too many, too many.”

Mrs. Ramos and about 100 other members of the Oakland, Calif.-based PICO National Network converged on the sidewalk outside the Treasury Building, next to the White House, for a prayer service Nov. 18.

They gathered in hopes of convincing Treasury Secretary Henry Paulson to “stop preventable foreclosures,” those that can be avoided by among other things loan modification to bring down the amount of homeowners’ payments.

“That’s what ‘stop’ means,” said the Rev. Lucy Solin, pastor of a Lutheran congregation in California, during the prayer service.

Each of the speakers and those reciting prayers urged Mr. Paulson to “wake up,” with the crowd repeating “wake up” in unison afterward.

Speakers cited statistics from the Center for Responsible Lending, which estimated that 1.2 million homes financed through subprime mortgages had already been lost to foreclosure, and another 2.2 million homes were at risk.

The prayer service was the starting point for a full day of PICO activities, which included visits to Treasury Department officials and to the office of Rep. Barney Frank, D-Mass., chairman of the House Financial Services Committee.

Rep. Frank grilled Mr. Paulson during a Nov. 18 committee hearing on why he has refused to use any of the $700 billion in the federal financial rescue/bailout bill to stop foreclosures.

“The bill is replete with authorization for you not simply to buy up mortgages but in effect to do some spending” to assist homeowners, he told Mr. Paulson during the hearing. “Clearly part of this was not just to stabilize, but to reduce the number of foreclosures, for good macroeconomic reasons.”

Mr. Paulson said he had the authority to use money for homeowners, but added that the money should go toward “investment” in financial institutions rather than “spending.”

He told the committee, “The primary purpose of the bill was to protect our financial system from collapse. The rescue package was not intended to be an economic stimulus or an economic recovery package.”

The Democratic-run Congress and the Republican-led White House are at odds over a $100 billion economic stimulus package and an additional $25 billion to help Detroit automakers crippled by the ongoing financial turmoil. If no agreement is reached before the current Congress adjourns, congressional leaders expect to try anew in 2009, when Democrats will enjoy larger majorities in both the House and the Senate as well as occupy the White House.

The PICO National Network was founded in 1972 by Jesuit Father John Baumann as the Pacific Institute for Community Organizations. It changed its name in 2004 to People Improving Communities through Organizing to reflect that it has affiliates in 150 cities in 17 states, as well as six European nations and Rwanda.