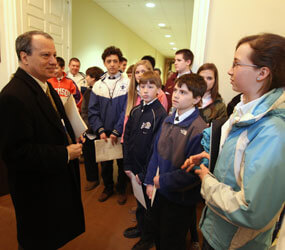 ANNAPOLIS – One day before Archbishop Edwin F. O’Brien was to announce a comprehensive plan to consolidate Catholic schools, a State Senate committee heard testimony March 3 on a bill that supporters say would help prevent other schools from closing.

Senate Bill 385, which would establish a business tax credit known as BOAST – “Building Opportunities for All Students and Teachers in Maryland” – was introduced by Sen. Edward DeGrange of Anne Arundel County.

The measure would grant businesses a 75 percent state income tax credit for donations to scholarship organizations for nonpublic school students. It would also support enrichment programs in public schools and professional development for public and private school teachers.

Given the instability of many nonpublic schools, bill supporters expressed a sense of urgency in passing the measure this year.

Their efforts received a major boost when Gov. Martin J. O’Malley threw his public support behind BOAST in a March 3 letter urging members of the Senate Budget and Taxation Committee to pass SB 385.

“The BOAST bill will increase scholarships for children in low- and middle-income families and stabilize enrollment in nonpublic schools,” Gov. O’Malley said. “I believe the bill is crucial if we are to stem the tide of private school closures in the state.”

Gov. O’Malley said school closures “represent a loss of educational diversity and opportunity for our students and will ultimately increase costs and enrollment pressures on our public school systems.”

The Senate passed BOAST in the last legislative session, but it was blocked in the House of Delegates Ways and Means Committee by Montgomery County Democratic Del. Sheila Hixson. The chairwoman did not allow it to come for a vote.
When asked whether the bill will come to a vote in her committee this year, Del. Hixon told The Catholic Review she is “talking about it and looking at it, now that the governor has come out and backed it.”

“We may consider some amendments to see perhaps if we could expand the BOAST bill to the public schools,” she said.

As written, the measure already includes benefits for the public schools.

Outside the Statehouse shortly before the Senate hearing began, hundreds of students from Catholic and other private schools rallied in support of the long-sought measure. Wearing T-shirts promoting the bill, they also met with lawmakers and urged them to vote for the legislation.

Del. James Proctor, lead sponsor of the effort in the House of Delegates, expressed confidence that this could be the year BOAST becomes law.

“Our chances of getting this passed are better this year than any other year,” said Del. Proctor, who represents Prince George’s and Calvert Counties. “We have 75 sponsors in the House – and it takes 71 to pass the bill in the House. We can do this.”

Several lawmakers noted that if nonpublic schools were to close, it would put pressure on the public schools.

“We need to pass this bill now,” Sen. DeGrange said.

Because of the financial challenges facing the state, BOAST supporters are not seeking funding for the measure. Instead, they hope to authorize the program so it will be set to run when future funding is available.

In her testimony at the Senate hearing, Mary Ellen Russell, executive director of the Maryland Catholic Conference, noted that enrollment in Catholic schools in the Baltimore archdiocese has declined an average of 1,200 students in the last two years.

Moments after meeting with several of her lawmakers, 12-year-old Abbey Moran said nonpublic schools need to remain strong because they help prevent overcrowding in the public schools. The seventh grader at School of the Incarnation in Gambrills, one of 10 students from her school to lobby their lawmakers, said her heart goes out to students in closing schools.

“It’s hard on kids to have to find new schools,” she said. “We want to pass this bill to keep schools open. Whether we are in public schools or nonpublic schools, we are all the youth of America.”