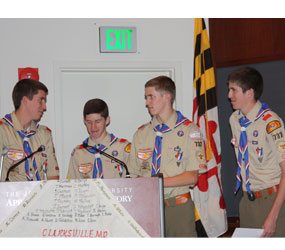 As quadruplets, 18-year-old John, William, David and Patrick Goodspeed are used to people noticing them.

“A joke when people meet us is that we already have our basketball team, which is what happened when we were little,” William said. “Bored? Go outside and play two-on-two!”

“I was never really conscious about the fact that we were all born at the same time, or even looked similar … they were just my brothers,” David said.

The parishioners of St. Louis in Clarksville have done virtually everything together; perhaps the crowning collective achievement was becoming Eagle Scouts earlier this year.

In order to achieve the rank, Patrick made lakeside recycling bins for fishing line; David built and installed five bat boxes at St. Louis; William helped a Howard County therapeutic and recreational riding center, while John built 12 steps that lead to a bird cage at a conservancy.

“It felt really good because I could see the finished project and reflect on how much time, work, and leadership went into completing it,” John said.

When they were welcomed as Eagle Scouts during a ceremony, the Goodspeeds were, as always, side-by-side.

“We are used to standing together,” Patrick said. “I was happy they had done a good job and wondered when would be the next time we would all get something.”

Indeed, the boys have gone their own ways this fall – William at Towson University, David at University of Maryland Baltimore County and Patrick and John at Howard Community College.

One of the family’s last major undertakings before the boys went off to college was attending World Youth Day in Madrid, Spain. The mid-August gathering brought more than 1 million young Catholics together for a week. The trip was the idea of the boys’ mother, Eileen.

“I think the most important thing I learned while there was that the church has a very young and active group of people and a very bright future,” William said. “I feel like a lot of people have maybe lost faith in the younger generation of the church, but if they had been in Madrid with us they would have seen that we are alive and flourishing.”

Many young people from the Archdiocese of Baltimore who attended World Youth Day will gather with Archbishop Edwin F. O’Brien for a reunion Mass Oct. 15 at Mount de Sales Academy at 4 p.m.

“While in Madrid, our young people and young adults experienced a lot of ‘more,’ ” said Scott Miller, director of the division youth and young adult ministry for the archdiocese.

“When we re-gather, I hope that they still have expectations of more. I hope that they are demanding more of themselves within their faith as well as eliciting more connection with the church that was not just theirs for a few days in Spain, but remains their community throughout their whole lives.”

For a question and answer session with each of the Goodspeed brothers, visit CatholicReview.org/palmerblog.