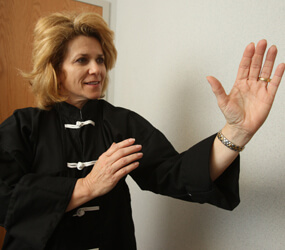 Karen Kansler was only in her early 50s, but arthritis in her hip was already robbing her of many of the greatest joys of her life. The on-the-go parishioner of St. Isaac Jogues in Carney had to give up bowling, golf and dancing. Even walking with her husband was becoming a chore.

Her arthritis developed in 1993 when she was hit by a drunken driver.

“I was very depressed,” said Kansler, an arthritis community outreach nurse at Good Samaritan Hospital in Baltimore since 1999. “Pain was consuming my days and it kept me up at night. It was interfering with my work, my recreation and everything I love.”

After going through the traditional hierarchy of orthopedic care, including physical therapy and exercise, Kansler decided to do what some of her patients had done before her: undergo a total hip replacement. The surgery to replace her left hip was performed in April at Good Samaritan.

After more than a month of rehabilitation, Kansler is back to much of her active routine. She recently returned to teaching aquatics classes to her arthritis patients and she is looking forward to offering a tai chi class in June. She feels like a new woman, she said.

“For me, the next 15-20 years are so important,” said 55-year-old nurse, acknowledging that it was “scary” to undergo major surgery. “The thought of giving them up and spending my time watching TV was out of the question.”

During her recovery, Kansler maintained a blog detailing her progress to encourage other arthritis patients. She now counsels those who are eligible for hip replacement surgery to consider it.

Undergoing the same ordeals as her patients helps her connect with them in a deeper way, Kansler said.

“The empathy factor is there 100 percent,” she said. “My advice to them is to talk with people who have gone through the surgery and find out if it’s right for them. Why wait? There’s so much life ahead.”