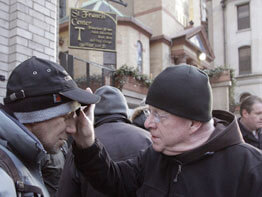 ROME – If people act on God’s call to conversion, he will forgive them everything and bless them, Pope Benedict XVI said just before receiving ashes and distributing ashes to mark the beginning of Lent.

“As we prepare to receive the ashes on our foreheads as a sign of conversion and repentance, let us open our hearts to the life-giving action of the word of God,” the pope told people gathered in Rome’s Basilica of St. Sabina Feb. 25.

The evening Mass was preceded by a penitential procession from the nearby Church of St. Anselm.

In his homily, Pope Benedict said the readings chosen by the church for Ash Wednesday are meant to give guidance to Christians for the 40 days of Lent and to provide them with encouragement to follow the Lenten journey of conversion with courage.

The call to conversion is loud and clear in each part of the Ash Wednesday Mass from the opening prayer to the readings and hymns, he said.

“The promise of God is clear: If we listen to his invitation to convert, God will make his mercy triumph and his friends will be filled with innumerable blessings,” the pope said.

The Gospel reading from Matthew, he said, puts Christians on guard against “ostentation and hypocrisy, superficiality and self-satisfaction, reaffirming the need to nourish an uprightness of heart.”

At the same time, the Gospel explains that the way to grow in the purity of heart is to cultivate a closer relationship with God the Father, he said.

Pope Benedict said that during the year of St. Paul, marking the 2,000th anniversary of the apostle’s birth, he wanted to focus in a special way on Paul’s writings and conversion story.

“Paul experienced in an extraordinary way the power of the grace of God,” which is also the grace of the death and resurrection of Jesus Christ, he said.

Catholics do not pretend during Lent that they do not already know that Jesus rose from the dead, the pope said, but as they prepare for Easter they are “already enlightened by the brightness of the paschal mystery” of Jesus’ death and resurrection.

A Christian’s Lenten journey of conversion must be, like St. Paul’s, a call from the risen Christ to change, to accept the forgiveness won by Jesus on the cross and to dedicate one’s life to following him, the pope said.

St. Paul’s call to refuse to allow sin to reign in one’s life is an affirmation that while salvation is a free gift of God an individual must take the step of accepting that gift, he said.

“On the one hand, this affirms the victory of Christ over sin once and for all with his death and resurrection,” he said, and on the other hand, Christians are exhorted to not let sin re-enter their lives.

“So that Christ may reign fully in him, the baptized person must faithfully follow his teachings; he must never let down his guard so as to ensure the adversary cannot win back any territory,” Pope Benedict said.

The Lenten emphasis on prayer, almsgiving and fasting highlights the three most effective defenses against evil, he said.

The pope prayed that a more frequent reading of the Bible, more intense prayer and “an austere and penitential style of life will be a stimulus to conversion and sincere love toward our brothers and sisters, especially the poorest and neediest.”