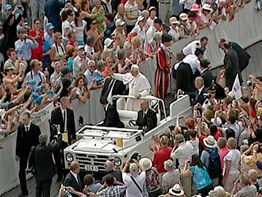 VATICAN CITY – A 27-year-old German man was forced to undergo immediate psychiatric treatment June 6 after he jumped over a barrier in St. Peter’s Square and reached the back of the open jeep in which Pope Benedict XVI was riding.

Jesuit Father Federico Lombardi, Vatican spokesman, refused to release the man’s name but said he was in a Rome psychiatric facility by 2:30 p.m., about four hours after being tackled to the ground by Vatican police.

The man was first taken to the Vatican police station and questioned by Gianluigi Marrone, a Vatican judge, Father Lombardi said.

“The young man’s intention was not to make an attempt on the life of the pope, but to carry out a demonstrative act to attract attention to himself,” Father Lombardi said.

Because the young man was “showing clear signs of mental imbalance, psychiatric doctors from the Vatican health service were called, and they arranged hospitalization for obligatory treatment in a protected, specialized health facility,” the spokesman said.

“The case is, therefore, considered closed,” Father Lombardi said.
Pope Benedict was in St. Peter’s Square for his weekly general audience. The pope did not appear to have noticed the young man or the activity of Vatican security agents and police forcing the man to let go of the jeep.

Dressed in a red shirt, dark shorts and a baseball cap, the young man was in the third or fourth row of spectators behind a wooden barricade in the square. As the pope approached, a police officer moved directly in front of the young man’s section of the crowd, although it was not clear what had attracted the attention of the officer.

The young man jumped over the people in front of him and used the barricade to push himself farther, knocking over the police officer.
He managed to hold onto the back railing of the jeep for a just a few seconds before being forced to let go.

Monsignor Georg Ganswein, the pope’s personal secretary, was in the jeep and also attempted to push the young man away.