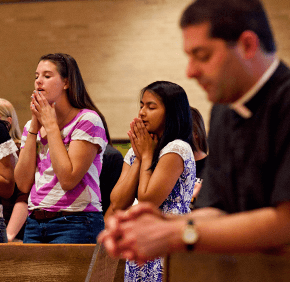 FULLERTON – Two days after a parishioner of St. Joseph, Fullerton, was shot at a nearby public high school, two dozen of his peers gathered at the church for a prayer service.

“We have to provide the community an opportunity to process the event,” said Lauren McKeegan, St. Joseph’s youth ministry coordinator. “It’s our job as youth ministers to facilitate that conversation. No one gets instruction on how to deal with these things.”

Daniel Borowy, who has Down syndrome, was shot at Perry Hall High School Aug. 27, the first day of school for hundreds of thousands of students in Maryland.

As of Aug. 29, McKeegan said, Borowy had undergone two surgeries since being wounded in the shooting. The 17-year-old is expected to recover.

Borowy’s older brothers are alumni of The John Carroll School in Bel Air. Nicholas graduated in 2007; Jonathan in 2010.

Father Louis A. Bianco, associate pastor of St. Joseph, said the parish community wants “to provide an experience for the youth that is prayerful and positive and to answer any questions they might have.”

During the prayer service, the teens wrote their prayers on cards and put them in the Archdiocese of Baltimore’s pastoral cross. They spent about a half-hour in four small groups to discuss their emotions since the shooting and made cards for the Borowy family.

Father Bianco, the adult facilitator of one group, asked the teens to share their reactions to the shooting. He stressed the importance of prayer and forgiveness.

“People come from all different backgrounds and we don’t know what someone is going through,” Father Bianco said to the group. “People are capable of great, great good and great evil.”

During the intercessions, prayers were offered for Borowy and Robert Wayne Gladden, Jr., the 15-year-old charged with attempted first-degree murder and first-degree assault in the shooting, according to online court records.

Victoria Ranneberger, a Perry Hall High freshman and St. Joseph parishioner, prayed as soon as she learned of the shooting.

“It’s one of those things you do,” said Ranneberger, who added that she felt relieved after the prayer service.

“I had somebody to talk to about it (the shooting),” she said. “I’m not the only one that was concerned and had questions.”

Zack Smith, a senior at Perry Hall High and a parishioner of St. Joseph, said the prayer service was “a really great opportunity to extend prayers to their families.”

“They have to be going through so much,” said Smith, 17. “It’s great that the community is supporting them.”

The following online resource is available for parents.