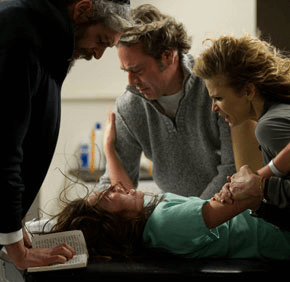 NEW YORK – Catholic exorcists get some time off with “The Possession” (Lionsgate). Since this mostly gore-free chiller’s premise rests on Jewish tales of demonic indwelling by beings called dybbuks, it’s a Hasidic student, rather than a priest, who eventually gets summoned to the rescue. And file this one under “Only in America”: said scholar – Tzadok by name – is played by Hasidic rapper and reggae singer Matisyahu.

At the outset, recently divorced dad Clyde Brenek (Jeffrey Dean Morgan) hardly knows what he’s letting himself in for when he and his two daughters, Hannah (Madison Davenport) and Em (Natasha Calis), stop by a weekend yard sale. There, Em’s fancy is taken by a seemingly innocuous wooden box and Clyde casually agrees to buy it for her.

Em’s interest soon turns to life-blighting obsession as the dybbuk that was supposed to be trapped in the container forever emerges and instead takes up residence inside her. Logically enough, Clyde and his ex, Stephanie (Kyra Sedgwick), assume Em’s deteriorating demeanor is an aftereffect of their split. But as eerie and inexplicable events continue to plague the family, Clyde at least realizes they’ll need to turn to someone other than a therapist.

Danish-born director Ole Bornedal initially achieves above-average results with his macabre doings, which are ostensibly based on real events. But returns diminish noticeably as his film approaches its overwrought climax.

Clyde and Stephanie’s situation is used as the vehicle for a strong pro-marriage message, however. In one poignant scene, Clyde watches as Stephanie and the girls sit down to dinner with Stephanie’s boyfriend Brett (Grant Show). The quartet makes up a family circle from which Clyde feels both physically and emotionally excluded.

Another plus is the respectful treatment of the Jewish faith in Juliet Snowden and Stiles White’s script, including Clyde’s fervent recitation of the 91st Psalm at Em’s bedside. Of course, the admixture of folklore, like that of the dybbuk, though necessary to the filmmakers’ purpose, tends to blur the bright line between mere legend and revealed truth.

The film contains some violent and potentially disturbing images, a premarital situation, at least one use each of profanity and crude language and brief sexual references. The Catholic News Service classification is A-III – adults. The Motion Picture Association of America rating is PG-13 – parents strongly cautioned. Some material may be inappropriate for children under 13.