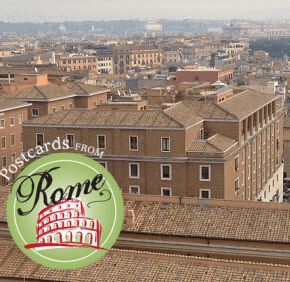 Periodically, the Catholic Review will feature “Postcards from Rome,” an update on the life of Cardinal Edwin F. O’Brien and Monsignor Adam Parker in Rome. The photos and information are provided by Monsignor Parker as he experiences Italy. On May 4, Cardinal O’Brien’s shipping container arrived from Baltimore, and he took up residence in an apartment building at the Vatican.

This photograph features a view of Cardinal O’Brien’s apartment building from Pope Benedict XVI’s window. The apartment on the top floor of the building used to belong to the pope when he was known as Cardinal Ratzinger. About a dozen Cardinals live in the building today.