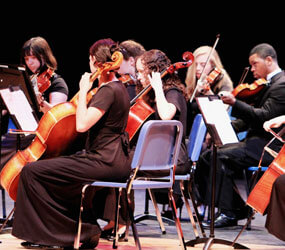 On the television show “Glee,” high school glee club members are such social misfits that bullies chuck red slushies at their classmates.

Something far different is happening in high schools in the Archdiocese of Baltimore, where some music programs are so big, they account for 30 to 40 percent of the student body and rival athletics as a tool for marketing and recruiting.

Similarly, 200 of 550 students at Baltimore’s Archbishop Curley High School are involved in the fine arts. Curley responded to all that interest by building The Holthaus Center for the Arts in 2010, which included state-of-the-art facilities for the choral, instrumental and theater groups

“The major thing that attracts students is quality,” said Michael Gaffney, Curley’s fine arts director and chorus teacher. “When a student is coming to a school shadowing, they see things like that and brand new playing fields as tangible evidence.

“We haven’t even begun to see the benefits yet.”

Heusgen said there is a false perception, popularized in Glee, that “jocks” and “band geeks” don’t mix. The reality, she said, is that music binds them in a common language.

“A lot of athletes feel like one of their greatest joys in high school is being part of our music program,” she said.

Gaffney said that all-boys Curley is the same way.

Alex Walker, a rising senior at Mount de Sales Academy in Catonsville, said the band program refers to itself as a family.

“I used to be extremely introverted to the point that I felt afraid to even speak up in class,” Walker said. “Now I find it difficult to go a whole class without speaking. Being in the orchestra has helped me discover who I am and gain confidence in myself, and I would not be the person I am today without it.”

Amanda Polanowski, a 2010 graduate of Mount de Sales, was a sophomore there when she joined director Jeff Hosier’s instrumental program. Having previously played piano, she found a love of percussion instruments. Now a special education major at Towson University and a member of its marching band, she constantly looks for ways to integrate her two loves.

“I know you can use music in many ways,” she said. “It’s something that can relate to all the ages. I cannot imagine my high school experience without band.”

That is music to a teacher’s ears.

“It’s thrilling that you may have some part in creating a life-long love of music,” said Huesgen, the Spalding director.

“Music can be a very safe way for students to get away from their other subjects,” said Hosier, who said that there about 70 musicians at all-girls Mount de Sales. “This is their chance to really open up and be creative.”

At Curley, Gaffney said that most vocal students have never sung formally before entering its doors. Some go on to receive scholarships. He witnesses that growth, especially in young men undergoing physical development.

“Everyone in that room has a changing voice except me,” he said. “One student might be singing baritone one month and bass the next. Being that they’re being sent to different sections, it’s making them better musicians. It’s very rewarding.”

Seton Keough School’s Concert Band won first place, received the highest scores of all the competing instrumental ensembles and was awarded the Instrumental Champion Trophy at the Fiesta-Val adjudication in New York this past spring. The school’s a capella choir and honors choir won first place and were named Grand Champions of the festival.

Notre Dame Preparatory School commissioned a music piece for the school’s 50th anniversary in Towson. Its choral and instrumental students performed it this past spring.

In Bel Air, students in The John Carroll School’s music program have used their skills for the school’s renowned musicals, which have “full-blown orchestras,” according to Kim Brueggemann, associate director of enrollment.

That performing arts program has been so successful, John Carroll is opening an academy for children 7 and older this fall. It will feature ballet, tap, hip hop and jazz dance classes, in addition to musical theater.

“I feel very fortunate I’m a part of an institution where the leadership sees the need,” Brueggemann said. “This is truly an amazing opportunity.”

The academy opens opportunities for the future.

“Our hope, certainly, is that (academy) students will be on our campus and see our facilities and think about coming here to John Carroll,” she said. “It’s a fantastic education.”