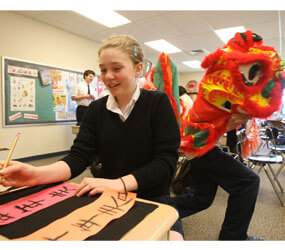 The first-year American Sign Language teacher at St. John Regional Catholic School in Frederick spent the previous three months teaching the language to fifth-grade students, but wasn’t sure she was successful.

Principal Karen Smith was addressing hundreds of people – including Archdiocese of Baltimore officials, political leaders, supporters, families and students – as the school was celebrating its designation as a Blue Ribbon School of Excellence by the U.S. Department of Education.

After Smith talked about the school’s successes and dedicated faculty, the fifth graders broke into sign language applause.

“We only had six classes or so at that point,” Rensberger said. “When you’re a new teacher and you’re not sure how kids are responding to it, and then they put into action, it’s amazing.”

It was also satisfying for Smith, who launched the Foreign Language Experience (FLEX) program last fall.

The multi-language approach was borne out of research. After years of offering Spanish in first through eighth grade one period a week, students were still not emerging fluent.

The idea is that from fifth through eighth grade, students will study a different language each year. The start of the program meant the end of Spanish at the school.

“A little light bulb went off in my head because I actually taught in a school in New Jersey where they had a FLEX program,” Smith said. “One year they took French, another they took Spanish or German. They only got it for a year. This way, everybody starts out fresh.”

The goal is to create interest in the languages for high school and beyond.

Rensberger is also teaching the language of her ancestors, Italian. Like in sign language, students are relishing the new class.

“It’s helped me with my grammar,” seventh grader Cheyanne Nevenschwander said of Italian. “It’s even helped me through my school work.”

Smith teaches Latin, and students have learned the Sign of the Cross in her class.

Because of time limitations, it took three years to teach one book of Spanish previously. Some public schools offer it daily. Smith’s research found that if a school was dedicating less than five percent of class time to a foreign language, the children wouldn’t be fluent.

Compounding the issue was that the school receives 12 to 15 new students in the sixth grade each year. They were on different learning curves each fall.

Nevenschwander said of the transition from Spanish: “I’ve learned more in Italian than I have in Spanish and I’ve only taken this for a couple of months.”

Smith said the program allows for new approaches each year.

“It gives us flexibility because if we lost a teacher or if we had the opportunity to hire another teacher who could offer another language … we can change out any language for a year,” Smith said.

One of the major components of the program is to teach the culture of the language. They eat native foods and hear from guest speakers. The fifth grade even saw a deaf stage performance.

“It’s fun to have a change of pace,” Eash said. “It’s challenging because it’s new.”

With the increase of Chinese-U.S. relations and St. John’s proximity to the Washington area, the addition of the language and culture class could give students a major leg up in the future.

Chung, who works through a local agency and part-time at the school, said St. John is the only private or Catholic school in the region to offer the language.

“It is forward-thinking and keeps up with a trend,” Chung said of the FLEX program. “We Americans have to compete globally, so we’re preparing them to be global citizens.”
For a video of the FLEX program in action, visit https://www.catholicreview.org/subpages/sjrcs_videos.aspx.