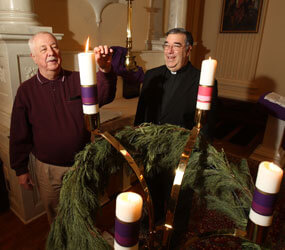 FREDERICK – Beloved traditions can evolve or fall away.

Worshipers at St. John the Evangelist Parish in Frederick, however, can count on Bill Mohan to be seated as always for Christmas Midnight Mass – just as he has for the last 65 straight years, through war, military service, career changes and moves.

“Midnight is the birthday of Jesus, and that’s what we try to remember,” Mohan said of his enduring commitment to that special Mass. “If you want to say any Mass if festive, you have to admit that’s the one.”

The 74-year-old has led a life dedicated to his sister, Carolyn, his late mother and the local Catholic community. Monsignor Richard J. Murphy, pastor of St. John, said that Mohan subtly reflects that commitment to the parish around him.

“He is a quiet, gentle, good person, who is very much about not drawing attention to himself,” he said. “His dedication to Midnight Mass through wars and events over the years shows a tremendous commitment, which he also shows with his joy in serving our parishioners in whatever opportunity he can find.”

A retired accountant, Mohan helps each week with counting the parish’s Sunday collection, but his impact on Frederick County and its Catholic institutions is significant and dates back over several decades.

Mohan devoted himself to Catholic education, through positions on the boards of Frederick’s The Visitation Academy, for girls pre-K-8, and St. John’s Catholic Prep. He served for decades on the board of Friends of Catholic Education, a Frederick County group that raises funds and issues scholarships to Catholic students.

That commitment, he said, stems from the fulfillment Catholic education brought to his life.

He began at the old St. John parish school in the early 1940s, graduated from St. John’s High School in a class of 21, then completed his college education in Emmitsburg, at what is now Mount St. Mary’s University.

“No matter what you do or where your life heads, at Catholic school you have had the basics,” Mohan said. “Those basics come from the home, also.”

Family life and those it embraced played a large role in the genesis of his Midnight Mass tradition, as the Mohans lived outside Frederick and came each Christmas Eve to a friends’ home for a party, a block from St. John the Evangelist.

“My father and I would always leave early to walk up the alley,” he said, in order for him to take his place among the parish’s 30 altar boys for the Midnight Mass processional, a tradition that faded away.

“We usually had to keep some of the boys awake,” he said, by poking them with elbows for the late-night service.

He continued his Midnight Mass tradition without missing a beat, through college at the Mount and even when military service took him to Germany, as leave brought him home in December, just in time for Midnight Mass. Work transferred him to Silver Spring for 18 years, but he always returned home to attend Midnight Mass with his mother and sister.

“I’m sure I’m not the only one who falls in to this category,” he said modestly. “There must be other people who have made Midnight Mass every year.”

Mohan expects again this year to enjoy Christmas Eve dinner at his sister’s home, open gifts and be seated beside her, as always, at Mass. He has gotten used to the fact that now he must reach the church early to get a good seat.

“When I was young, families had their names marked on the pews (the Mohans had a half-pew),” he recalled. “People without pews shivered outside until 11:45, when they were allowed to come in and sit if the spots weren’t taken.”

The passing years have allowed him to note changes in behavior at Mass.

“Midnight Mass has gotten more crowded and more casual, that’s what I notice,” he said. “People talk while they’re at Mass, and for the young people, it seems that it’s a date!”

In contrast, one of his favorite Midnight Masses was celebrated in the late 1980s by Monsignor James W. Hannon, now the pastor of multiple parishes in Western Maryland.

“I remember when Father Hannon was a newly ordained priest,” Mohan said. “It was a bitterly cold Christmas Eve, and the electricity went out. Father Hannon was running around lighting all the candles, and with no organ, the choir had to sing a capella.

“It was the most beautiful Midnight Mass ever. It just made it a true Silent Night.”