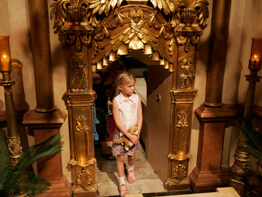 WASHINGTON – Since 1899, a Franciscan monastery in the Brookland neighborhood of Washington has been a popular stop for pilgrims who want a glimpse of the Holy Land.
The grounds of the monastery feature dozens of replicas of significant Christian sites from Europe and the Holy Land, including many surrounding the life, death and resurrection of Jesus Christ.
The friars of Mount St. Sepulcher Franciscan Monastery and Commissariat of the Holy Land represent the Christian interest in the Holy Land, and it shows in the beauty of their church and the surrounding gardens.
Brother Maximilian Wojciechowski, a friar of the monastery since 1994, said the places surrounding Jesus’ life can sometimes seem surreal when they appear in Scripture. He said the monastery brings new life to the Gospel.
He said the appeal of the Holy Land to Christians is that “it’s actually where Christ was born and died and raised.”
The church is the dominant structure on the grounds. It is not a replica of any one structure found in the Holy Land, but was designed with a number of architectural influences found in buildings there. Within, beneath and around the church are full-size reproductions of actual Holy Land sites, including churches, memorials, shrines, tombs and historical monuments.
The grounds in Brookland were dedicated in 1899 after Father Godfrey Schilling purchased the land and commissioned the building of the monastery and church. Architect Aristide Leonori visited the Holy Land, taking measurements and photographs of the sites, which were then replicated on the grounds between 1900 and 1930.
A bronze baldacchino covers the main altar in the center of the church with the Twelve Apostles carved on its pillars. The dome above reflects Byzantine and Italian Renaissance and Romanesque styles. The floor plan of the church is that of a Jerusalem cross, one large cross surrounded by four smaller crosses, one in each corner. Staircases lead to four raised altars at the ends of the church.
At the east end, below the altar of Thabor and a depiction of the Transfiguration, is a reproduction of the Holy Sepulcher, the tomb where Jesus’ body was buried. This is one of the Holy Land sites Leonori visited and measured to ensure the accuracy of its dimensions. Stucco reliefs covered in silver and bronze adorn the chambers of the sepulcher.
Across from the sepulcher is the altar of Calvary and a life-size depiction of the Crucifixion spanning the wall. The altar is constructed to appear as it does over the true Crucifixion site, and the base of the altar is raised to the exact height of Mount Calvary in Jerusalem. The church’s interior is filled with paintings, reliefs and brilliant stained glass.
Beneath the church lie passageways modeled after the catacombs in Rome. This section of the church is accessible only on 45-minute guided tours the monastery provides.
Darkened corridors go between reproductions of the tombs of Sts. Cecilia and Sebastian, found in the 900-mile expanse of the catacombs in Rome. The remains of Sts. Benignus and Innocent are also preserved beneath the church.
The memorials and reproductions at the monastery in Brookland are part of a worldwide undertaking to promote and preserve the Christian presence in the Holy Land, the birthplace of Christianity. More than 330 Franciscans work in 74 sanctuaries, 16 schools and 29 parishes throughout Israel, Palestine, Jordan, Syria, Lebanon, lower Egypt and Cyprus.
The monastery’s work and the Franciscan presence in the Holy Land depend on donations provided by a national Good Friday collection and on private contributions from patrons who visit the order’s commissariats around the world.
The Franciscan order has maintained a presence in the Holy Land since 1219 when the Franciscan order’s general chapter established the province of the Holy Land.
Brother Maximilian, who works in the monastery gift shop, said Franciscans are drawn from all over the world to serve in the Holy Land, then return to their home countries to work in places similar to the Brookland monastery.
Brother Maximilian is from Buffalo, N.Y., and had his mind set on entering another seminary, but, he said, “when I first came in through the front gate, my eyes just lit up. This was it.”
The church is surrounded by a rosary portico with 15 chapels containing mosaics of each of the joyful, sorrowful and glorious mysteries. The Hail Mary is printed on tablets in nearly 200 languages around the portico. Statues of Father Schilling and Sts. Francis and Christopher are surrounded by roses and a variety of other flowers in front of the church.
Alongside the church is a full-size reproduction of the fourth-century church outside Assisi, called the Portiuncula chapel, which St. Francis repaired personally. This chapel was measured by Leonori to ensure an accurate model, inside and out.
The monastery gardens south of the church contain more replicas of Holy Land sites, dispersed among the Stations of the Cross that wind their way through the bushes, flowers and trees. Like the catacombs replica, the Lourdes grotto is an exception from the Holy Land focus. It is an exact copy and appears just as it does in southern France where Mary appeared to 14-year-old Bernadette Soubirous in 1858.
Aside from the architectural and historical features, the monastery also hosts organ concerts, confession, daily Mass and vespers with the friars.
All the monastery’s friars at some point have served in the Holy Land, where they worked in schools and ministered to the poor. Each year, those friars lead several pilgrimages through Europe and the Holy Land.