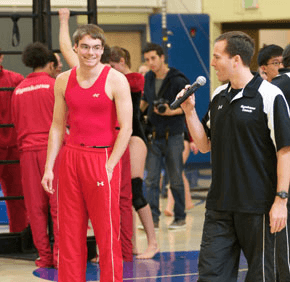 By Matt Palmer
mpalmer@CatholicReview.org
Before his sophomore year at the University of Maryland in College Park, Joe Kreft had never participated in gymnastics. Hearing about and seeing Maryland’s Gymkana exhibition team, Kreft was intrigued.
“I just kind of walked into the gym,” Kreft said. “They’ll take anyone. They’ll teach anyone.”
Kreft, now a Maryland junior, returned to his elementary school, St. Agnes in Catonsville, Feb. 10 as an integral member of the Gymkana Troupe, which has appeared on the America’s Got Talent NBC television show. St. Agnes students successfully completed a wrapping paper fundraiser to earn the Gymkana visit to the parish center by raising more than $28,000 for the school.
“I told them that if they reached their goal, they would get a big performance,” said Susan Banks, principal. “Our first grade teacher attended one of the (Gymkana) shows at the University of Maryland and came back excited and saying how good it would be for the kids. I went home and watched America’s Got Talent and said, ‘Oh my gosh, there they are!’”
Students bounced about in the center’s bleachers, letting out “oohs” and “aahhs” as the Gymkana members flipped all across the room Feb. 10. In between routines, Gymkana members reminded St. Agnes students to avoid the trappings of drugs and alcohol.
It was an added bonus for the school that Kreft was on the team. One of his St. Agnes classmates, Dominique Parkes, is also on the Gymkana team, but couldn’t make the trip.
Since Kreft graduated, St. Agnes built the parish center, which also serves as a gym.
“It’s really nice,” Kreft said. “I wish we had it when we were here.”
While there were many new touches at St. Agnes School, Kreft couldn’t help but walk down memory lane.
Kreft, and his family, remain parishioners at St. Agnes. He was a student at the school from kindergarten through eighth grade, before moving on to Loyola Blakefield in Towson and the University of Maryland in College Park.
“It’s sort of cool to see teachers I had that are still here, even … from 15 years ago,” Kreft said. “I loved all my teachers. I got scholarships all through high school and college and they put me in a good place academically. ”
While Banks wasn’t principal while Kreft was a student at St. Agnes, she does know him because his mother was Banks’ administrative assistant for several years.
“He’s a different guy right now,” Banks said. “He was very quiet, very shy. But, now this has given him a lot of confidence.”
Kreft specializes in vault and trampoline and has been sculpted physically during the last two years thanks to nearly 10 hours of practice a week.
“This has probably put me in the best shape of my life,” he said.
As Kreft finished the first of two shows for St. Agnes students, he couldn’t help but think about far he had come. He hoped it would inspire St. Agnes’ current generation of students.
“To come back here and show what I’ve done and show the kids what they can do, it means a lot,” Kreft said.
Watch Kreft and Gymkana in action:
PrevNext