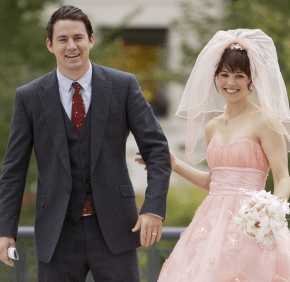 NEW YORK (CNS) — Poor Channing Tatum! Though he isn’t gone, he is forgotten in “The Vow” (Screen Gems), director and co-writer Michael Sucsy’s well-intentioned but flawed love story based on real events.

Tatum plays Chicago recording engineer Leo, whose romance with — and marriage to — artist Paige (Rachel McAdams) have made him a happy man. That all changes, however, when a car accident injures them both, and leaves Paige stricken with partial amnesia.

She awakens from a coma with no memory of their idyllic courtship or successful life together. Instead, she has mentally reverted to her pre-Leo days as a law school student engaged to go-getter ex-fiance Jeremy (Scott Speedman).

When her estranged parents, Rita (Jessica Lange) and Bill (Sam Neill), appear on the scene, it develops that Paige also has lost all recollection of the traumatic events that led her to separate from them.

Leo sets out to win Paige’s heart all over again. But Rita and Bill are angling to put their bewildered daughter back on the path to a legal career and drive her back into the arms of conventionally respectable Jeremy.

As penned by Sucsy in collaboration with Abby Kohn, Marc Silverstein and Jason Katims, this romantic drama certainly celebrates Leo’s extraordinarily determined marital fidelity. And it manages to strike a generally amiable tone as it does so.

But characterizations are shallow: Mildly bohemian Leo, for example, takes on his conniving 1-percenter in-laws, who we know must be evil because they, um, occupy an Architectural Digest-worthy home in Lake Forest.

The tale’s credibility — and therefore its impact — is also undercut by the excessive cuteness of the initial relationship between Leo and Paige. They’re shown popping chocolates into each other’s mouths and they later write out their self-composed wedding vows on menus from their favorite eatery.

Presumably in a nod to Paige’s profession, those promises are exchanged, not in a church or even at city hall but in a museum gallery. A friend of the bride and groom’s, who has somehow gotten himself temporarily vested with the necessary power by the state of Illinois, presides.

The film contains brief nongraphic marital lovemaking, a premarital situation, fleeting rear nudity, an adultery theme, numerous sexual references and jokes, at least one use of profanity as well as a couple of rough and about a half-dozen crude terms. The Catholic News Service classification is A-III — adults. The Motion Picture Association of America rating is PG-13 — parents strongly cautioned. Some material may be inappropriate for children under 13.