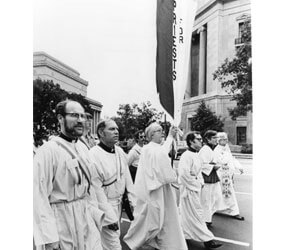 WASHINGTON – Father William R. Callahan, a leading activist for peace and social justice, died July 5 at Community Hospice in Washington of complications from Parkinson’s disease. He was 78.

The priest, a former Jesuit, also was known as an outspoken critic of church teaching on homosexuality and women’s ordination.

In 1979, he was ordered by the Jesuits’ superior general to stop speaking out in favor of women’s ordination. Ten years later, he was dismissed from the order but remained a priest. At the time, he told Catholic News Service that he was not given a reason for the dismissal.

A memorial service for Father Callahan was to be celebrated July 10 at the Thomas Stone Elementary School in Mount Rainier, Md., near the Quixote Center, a national Catholic justice and peace office which he co-founded in 1976 with Dolly Pomerleau and co-directed until last year.

The priest, diagnosed with Parkinson’s in 1996, donated his body to Georgetown University Medical School for study of the disease.

Loretto Sister Maureen Fiedler, a friend and colleague of Father Callahan for 35 years, told CNS in an e-mail July 7 that the priest “lived Gospel values and Ignatian values; he gave without counting the cost.”

“Tens of thousands of people were touched by his generosity, inspired by his passion for justice and delighted with his willingness to laugh in the midst of struggle. He dreamed a lot of seemingly ‘impossible dreams’ and made them come true,” said Sister Fiedler, host and creator of “Interfaith Voices,” a religion news magazine featured on public radio.

Jesuit Father Jim Hug, president of the Center of Concern in Washington, wrote in the group’s July online newsletter that “the Catholic justice community lost an extraordinary friend and companion” with Father Callahan’s death.”

“His spirit will surely continue the work,” he added.

Father Callahan was born in Scituate, Mass. He joined the Jesuits in 1948 at age 17 and was a member of the order’s New England province. Ordained in 1965, he became a nationally known speaker on social justice issues in the 1970s. An advocate for peace and justice in Nicaragua, he was critical of U.S. involvement there.

In 1971, he was one of three Jesuits who founded the Center of Concern, a Washington-based think tank on economic development and social justice issues.

In 1975, he founded Priests for Equality, which advocated full equality of women in the church, including ordination to the priesthood. For 20 years, the group worked on developing a Bible with inclusive language, which was published in 2007.

Over the years, various ministries were developed at the Quixote Center. Some of these groups later became independent. Groups formed under Father Callahan’s direction included:

– New Ways Ministry, a program of pastoral service to homosexuals. (The organization receives no official church recognition or sponsorship.)

– Quest for Peace, which countered congressional appropriations of aid to the Nicaraguan contras with matching amounts of private humanitarian aid to the people of Nicaragua. The group shipped more than $227 million worth of food, medicine and other humanitarian aid.

– Catholics Speak Out, which objected to what participants described as authoritarianism in church government.

In 1979, Father Callahan was ordered by Father Pedro Arrupe, then the superior general of the Jesuits, to stop speaking out in favor of women’s ordination.

That same year, the Archdiocese of Washington withdrew his faculties to preach or hear confessions within the archdiocese.

Before papal trips to the United States in 1979 and 1987, Father Callahan organized protests against the style of church leadership exercised by the pope and perceived sexism within the church.

In 1990, the Vatican denied the priest’s appeal of his dismissal from the Jesuit order.

The priest wrote a book on contemporary spirituality called “Noisy Contemplation – Deep Prayer for Busy People,” which has sold more than 100,000 copies. The book encourages readers to pray even in the midst of noise and activism stressing that prayer does not require the silence of a monastery.

A description of the priest on the Quixote Center website said he was an avid organic gardener and a dedicated runner. Even when his disease was slowing his ability to walk, he ran the Army 10-mile race. He called himself the “Parkinson Turtle” and finished the course.