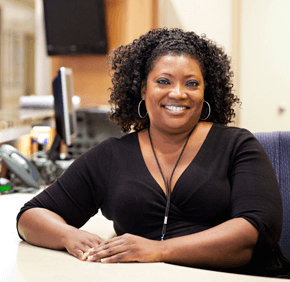 At $1.60, a one-way Baltimore City bus fare may seem like spare change.

Not for Trish Hampton, who, earlier this year, was without a home or job.

“That’s just so much when you don’t have it,” she said.

Earlier this year, the only thing between Hampton and homelessness was a friend’s futon. It was a stark contrast to her life just a few months before, when she had been living in Prince George’s County in a home she built with her husband, complete with an outdoor deck, garage and custom cabinets.

“I basically went from a mortgage to hand-to-mouth,” said Hampton, 48.

Before the recession, Hampton was executive director of Back-to-Basics Ministries, a faith-based nonprofit in Washington, D.C., focused on anti-violence community outreach. When the economy downturned, the program lost funding and she lost her salary. She was unemployed for about four years.

Then, earlier this year, she separated from her husband of 13 years.

Hampton moved to Baltimore in February hoping “to reinvent herself,” she said. With an education degree and administrative experience, she expected to find a job easily. She was open to anything.

McDonald’s and Macy’s said she was overqualified. Some large downtown corporations gave her a second interview, but never a job offer. She grew frustrated. Without an income, getting between interviews and the Enoch Pratt Free Library, where she searched online for jobs, was getting expensive on that $1.60 one-way fare.

“The market is just so oversaturated,” she said – something she thought she had escaped by leaving Washington.

For Hampton, Catholic Charities’ Work 4 Success Program at Our Daily Bread Employment Center made the difference.

She found herself in a diverse group; one student had a master’s degree, others were ex-offenders. Like her, they were trying to reinvent themselves, she said.

Work 4 Success includes mock interviews with companies such as The Johns Hopkins Hospital, Mercy Medical Center and Safeway that are also possible routes to real positions. Hampton’s classmates cheered each other on, once pooling money for sodas at an Inner Harbor restaurant to celebrate potential job offers.

Hampton found the camaraderie with her 13 classmates encouraging, but said her situation was humbling.

“But,” she said, “there was light at the end of the tunnel.”

Catholic Charities recognized Hampton’s administrative talents and hired her in June. She now is Our Daily Bread’s front desk coordinator, where she welcomes clients, coordinates executives’ calendars and manages mail for the 1,500 people who list Our Daily Bread as their address.

Hampton feels overqualified for the entry-level position, but is grateful for the work.

“I was just so happy for a paycheck, and to have taxes taken out, and not to have to rely on social services,” she said.

Hampton hopes to have opportunities to advance, she said. Meanwhile, she is trying to improve office efficiency, and is creating computer-based systems to track client mail.

She earns $13.64 an hour – almost twice minimum wage – and rents her own place near Lake Montebello. Making ends meet takes planning and discipline; she saves money by shopping online sales and eating her main weekday meal at Our Daily Bread. She now has funds for bus tokens, but hopes to qualify for a car through a charitable program.

From her desk near the front doors, Hampton now offers the words of encouragement she heard her first day at Our Daily Bread: “You’re going to be OK.”

“There are a lot of people who are hurting. Physically and emotionally, they’re going through a lot of stuff,” she said. “I’ve had people break down in front of me, and I’m like, ‘It’s going to be OK. I was there prior to June. Be patient. … Come to the Work 4 Success classes. It does work.’”