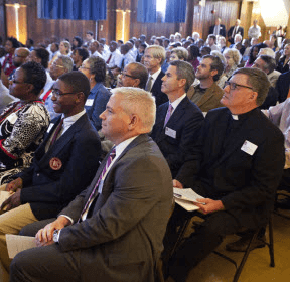 After he saw renderings for his school’s new science lab and library, Kenneth Cooper was bubbling with excitement about taking classes, beginning next summer, in the new school building.

“I was quite upbeat and ecstatic about learning in an environment like this,” said Kenneth, a sixth-grader at St. Ignatius Loyola Academy.

The former Catholic Community School in Federal Hill is being renovated in preparation for St. Ignatius’ July 2013 move about two miles south, said John Ciccone, president of St. Ignatius. The building has been vacant since 2009.

Renovations are expected to be complete by mid-summer 2013, in time for the 2013-2014 school year, which begins next summer, Ciccone said. The renovations, estimated to cost $4 million and to begin in mid-October, include the installation of an HVAC system, air conditioning and an elevator, Ciccone said.

The new building, which is 53 percent larger than the current school, will allow St. Ignatius to accept more students, Ciccone said. The school plans to begin accepting fifth-graders in three or four years.

“It’s better for Baltimore, better for the state of Maryland,” Ciccone said.

At its new location, the school will gain a gymnasium, library, media center and larger classrooms.

“Everything just gets bigger and better,” Ciccone said.

The search for a new building took more than a year and included 45 possible locations, Ciccone said.

“This was the best space for us, the right size, the right set up,” said Ciccone, who noted he doesn’t know what will happen to the current school building, owned by the Maryland Province, Society of Jesus.

“I wanted to send them somewhere that would challenge them,” she said.

Joe Callanan, a parishioner of St. John the Evangelist in Severna Park who has sponsored a St. Ignatius graduate and current student, supports the school because “the money is being put to good use, the results are very tangible.”

“They (students) do well,” Callanan said. “They go to high school and college. I’m very happy to be a part of it.”

“This building was built for Catholic education and it’s going to remain that way,” Father Carrion said.

1993: the year St. Ignatius was established

97: the percentage of St. Ignatius students who graduate from high school

72: the number of students who currently attend St. Ignatius

53: the percentage of additional students who can attend St. Ignatius at its new location

11: the number of months out of the year St. Ignatius students are in school