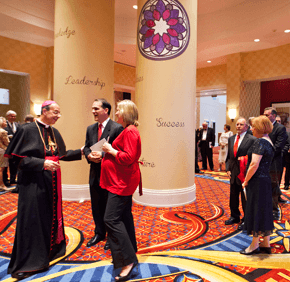 In its fourth year, the annual Gala for Catholic Education raised $750,000 in tuition assistance for Catholic schools in the Archdiocese of Baltimore Sept. 29 at the Baltimore Waterfront Marriott Hotel.

The event was a first for Baltimore Archbishop William E. Lori, who was installed in May. Visiting archdiocesan schools has been a favorite part of his introduction to the archdiocese, he told the gala’s 800 attendees.

“Our archdiocese has been educating young people for over 200 years,” he said. “We have a proven track record of success. I declare today, nobody does it better.”

Fifteen Catholic schools in the archdiocese have received the award.

At the gala, archdiocesan leaders applauded teachers, staff, parents, priests and religious, and philanthropists for efforts to boost Catholic education.

Gala speakers made the case that the investment yields a significant return.

“Catholic schools are a good thing – in fact, a very fine thing,” said economist Anirban Basu, chairman and CEO of the Baltimore-based Sage Policy Group and the gala’s keynote speaker. According to his research, Baltimore-area Catholic school students score higher on tests and are more likely to graduate high school, as well as attend and graduate college, than those who go to public schools.

This academic achievement is of a disproportionate benefit to older and lower-income communities, he said, adding that Catholic school graduates can expect to earn roughly $225,000 more than their peers and have a greater economic impact on the state.

Basu first reported his findings in 2010, but has recently updated some data.

Archbishop Lori said that Maryland Catholic schools compete for students with other good schools, making it important for them “to maintain and celebrate our excellence” and “to continue to tell our story and make it clear why Catholic education is still the best value in town.”

“Our schools do an unbelievable job of preparing the children they serve to be young men and women of faith – to be good, intelligent, prayerful, contributing members of society,” he said, which he attributed to the schools’ Catholic values.

During the gala, speakers encouraged attendees to text contributions for Catholic education tuition, which were listed on a large screen. The fundraiser led to friendly competitions for the highest donations at some tables.

Donations for archdiocesan Catholic schools tuition assistance can be made by calling 410-924-8415.