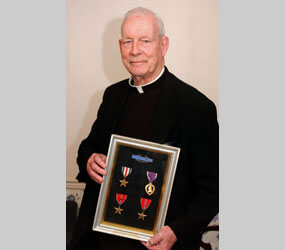 WASHINGTON – As a soldier in World War II, he fought in the Battle of the Bulge and won many awards for bravery. As a priest for the Archdiocese of Washington, Monsignor William O’Donnell served as a pastor, administrator and editor of the Catholic Standard newspaper.

And at his April 28 funeral Mass at St. Thomas Apostle Church in Washington, the priest was remembered as a man of God who dedicated his life to serving others.

“You have been a wonderful servant both to your country and to your church,” said Monsignor William Awalt, a retired priest, in his homily.

“Pray for vocations, in honor of this good man whom we bury today,” Monsignor Awalt said.

A Washington native, William O’Donnell attended St. Thomas Apostle and Immaculate Conception grade schools and Gonzaga College High School. After graduating from Georgetown University, he entered the Army during World War II and was awarded the Silver Star Medal, the Bronze Star Medal with oak-leaf cluster and the Purple Heart with oak-leaf cluster for service in Europe, and was later discharged with the rank of captain.

During a 2004 interview, he said his faith was a source of strength to him and other soldiers. “It was something there with us, that comes to the fore when the situation is very difficult and dangerous,” he said.

He was with the Third Army when it liberated several concentration camps. Witnessing the horrors of the death camps later shaped his strong opposition to abortion. He once wrote, “We thought that one of the reasons we fought was to obliterate such inhuman treatment of other human beings, but the passage of time demonstrates that this is not the case.”

After the war, he entered the U.S. Foreign Service and served in Hamburg, Germany, in 1946-47. After graduating from Georgetown Law School, he served as a trial lawyer for the Justice Department.

In 1957, his brother, Father James O’Donnell, a priest of the Archdiocese of Washington, died. Monsignor Awalt remembers William O’Donnell sitting across the desk from him and asking, “Do you think I can take his place?”

Father William O’Donnell was ordained a priest for the archdiocese in 1962, and over the years served as pastor of two Maryland parishes and as priest director of Catholic Cemeteries of the Archdiocese of Washington. He served as the Catholic Standard’s editor from 1966 to 1978.

“He was a vigorous advocate for the church and traditional morality,” said Tom Rowan, who worked with him at the Catholic Standard and later became the paper’s editor. “He had strong convictions about what was right and wrong and would happily take on all comers.”

Six of the priest’s young family members brought up the offertory gifts at his funeral Mass. In his remarks at the end of the Mass, Archbishop Wuerl encouraged Monsignor O’Donnell’s many nieces and nephews and grandnieces and grandnephews to honor his life and legacy by keeping the faith.