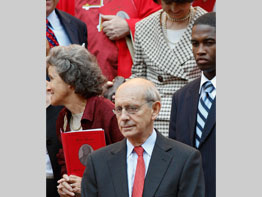 WASHINGTON – Jesuit-run Fordham University’s law school presented U.S. Supreme Court Justice Stephen G. Breyer with a prestigious ethics prize Oct. 29, despite a protest held outside the event and a call by a national Catholic organization to rescind the honor in light of the judge’s support for legal abortion.

University officials proceeded with the private award ceremony after Cardinal Edward M. Egan of New York publicly opposed the university’s selection of Justice Breyer as its 2008 recipient of the Fordham-Stein Ethics Prize.

A petition with more than 2,500 signatures from students, alumni and others stating the action was disrespectful to church teaching opposing abortion was delivered to university officials Oct. 29.

Cardinal Egan “has spoken to the leadership of Fordham University about this matter,” New York archdiocesan spokesman Joseph Zwilling said in a prepared statement. “As a result of these discussions, the cardinal is confident that a mistake of this sort will not happen again.”

Fordham University spokesman Bob Howe told Catholic News Service Oct. 30 that the private ceremony did take place, but would not confirm that Fordham’s president – Jesuit Father Joseph McShane – or other school officials had met with Cardinal Egan regarding the issue.

Mr. Howe also wouldn’t say whether the institution would change its policy for future awards to exclude candidates who do not agree with the Catholic Church’s teaching on life issues.

“We are not discussing the matter,” Mr. Howe said.

Justice Breyer said through a Supreme Court spokeswoman that he did not wish to comment on the issue.

In August when the university announced the award, William M. Treanor, Fordham’s law school dean, said Justice Breyer “has devoted his life to the public good” and is “a brilliant, influential, and path-breaking scholar.”

He said Justice Breyer embodied the ideals of the ethics prize as a jurist whose “opinions have been marked by thoughtfulness, balance, rigor and a commitment to justice and liberty. He has been an eloquent and forceful champion of judicial integrity.”

Those attending the awards event were met by a group of Fordham undergraduates carrying signs that read “Fordham students reject this award” and “Stand up for the dignity for human life,” said Sheldon Momany, 20, of Brattleboro, Vt., a Fordham junior and president of the university’s Respect for Life chapter.

“We were respectful and peaceful, but we let people on the street and people arriving for the award’s banquet (know) we were not happy that the university gave Justice Breyer this award,” Momany told CNS Oct. 30. “We had about 40 people in our group, most of them students, and we were also encouraged by the reaction we got from people on the street and cabdrivers, who gave us a thumbs up and waved.”

After learning last September that Fordham intended to honor Breyer, a 70-year-old associate justice appointed to the court by President Bill Clinton in 1994, officials from the Manassas, Va.-based Cardinal Newman Society expressed their outrage to Cardinal Egan and coordinated an online petition drive.

The Catholic organization has actively policed other U.S. Catholic colleges and universities during the past 15 years and publicly objected when those institutions have held events or honored people it views as offensive or diverging from church teaching, said Adam T. Wilson, outreach manager for the Cardinal Newman Society.