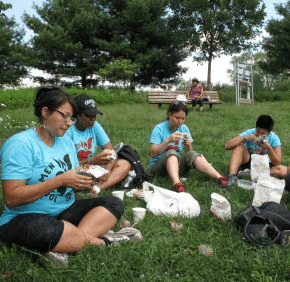 ASHLAND – By walking from Pennsylvania to Washington, Juana Flores and about 100 other women hope to get Pope Francis’ attention so he can deliver a strong message that America needs to treat its immigrants with dignity and respect.

“This is a moment where loss is affecting a lot of immigrant families,” said Flores, a former nun who today co-directs Mujeres Unidas y Activas, an organization of Latina women focusing on immigrant rights.

“If we are not supporting laws that go against family separation, then we are not living our Catholic lives,” added Flores, 54, a Catholic who lives in San Francisco.

She entered the U.S. undocumented in the early 1990s.

Whether or not the group manages to meet the pope, “we want him to listen to our stories,” she said through interpreter Catalina Nieto, as the women stopped for lunch in the grass in the Baltimore County community of Ashland Sept. 18.

Forty-three miles into their 100-mile pilgrimage, the women ate Qdoba burritos at a parking area for the Torrey C. Brown Rail Trail.

The group began the journey Sept. 15 at York (Pa.) County Prison, covering about 15 miles a day. The women will spend the night of Sept. 19 in Baltimore before pressing on to Washington.

hey plan to arrive at the Capital’s Basilica of the National Shrine of the Immaculate Conception at approximately 4 p.m. on Sept. 22 – the day of the pope’s arrival – and from there walk the final three miles of their pilgrimage accompanied by supporters. A closing vigil is planned for 6:30 p.m. at McPherson Square in downtown Washington.

After that, the pilgrims plan to arrive at the Ellipse – the park just south of the White House fence – as Pope Francis meets with President Obama and begins his papal parade Sept. 23.

The pilgrimage is being coordinated through We Belong Together, a campaign of the National Domestic Workers Alliance and the National Asian Pacific American Women’s Forum.

Maria Lira, 51, a Mexican immigrant living in Houston, said the immigrants she sees at work in her adopted city do not square with the “negative comments” she hears on television.

She is praying that people “listen more, and see that these people are doing a lot of good in the community,” particularly those who clean professionals’ houses and take care of their children.

“These kinds of services are the kinds of services through which we can support each other,” Lira added. “As a Catholic, I’m walking to support the people not getting dignity and respect at this time. I’m calling on the 70 million Catholics (in the U.S.) to support immigrants who are being separated from their families.”

Rosario Reyes, 38, who came to America from El Salvador 12 years ago, she said, left behind her son, Jose Ramon, who was one year old at the time.

“At least my son is back in El Salvador,” she said through the interpreter, in tears. “There are mothers walking whose family members have been taken away.”

“I’m walking so I can bring this message to Pope Francis,” she added. “He’s going to take it to senators and to Congress. With this act of love, Pope Francis will give us freedom.”

Jennifer Dillon, communications director of the National Domestic Workers Association, said the women had raised money for the journey online through supporters and through their connections to supporting organizations.