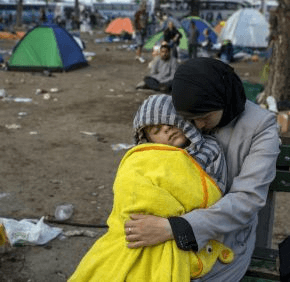 By Karen Sampson Hoffman
Special to the Review
JESSUP – The president of the Iraqi Christian Relief Council wants to raise awareness of the suffering of Assyrian Christians in Iraq and neighboring countries.
“Catholics need to remember what St. Paul said, that we’re all one body and if one member of the body suffers, we all suffer,” said Juliana Taimoorazy, who founded the Illinois-based organization. “We cannot call ourselves Christians if we don’t do something. We have to wake up to this genocide. We need to say something to our elected leaders.”
Taimorazy will bring that message to the Archdiocese of Baltimore Sept. 25, when she will speak at St. Lawrence Martyr Church in Jessup.
“We see two-minute news clips on television and become immune to the suffering related to Christians throughout the world,” said Trinitarian Father Victor Scocco, pastor of St. Lawrence Martyr.
Assyrian Christians are devastated by internal strife and advancement by the Islamic State, also called ISIS. Christians are being martyred or enslaved as prizes of war.
“Today we have barely 200,000 people left (in Iraq),” Taimoorazy said. “They’re destroying an ancient community that has survived for 7,000 years in this region. My heart bleeds for this.… The news buzzes in our back pocket and we look at (our smartphones) and we put it back. That is what breaks my heart as a Christian living in America.”
An Assyrian Christian born in Iran, Taimoorazy fled to Switzerland and then Germany before coming to the United States in 1990. In 2007 she began the Iraqi Christian Relief Council, which raises funds to provide shelter and supplies to Assyrian Christian refugees and to advocate to policymakers.
“The Holy Father is calling us to this, to wake up and see and hear and pray for Christians suffering persecution,” Father Scocco said. “We have a moral and spiritual obligation to clearly hear and see the persecution of Christians throughout the world and then do something in response, whether it is prayer or to get the word out beyond the two minute clip on the news.”
Assyrian Christians were evangelized in the first century, according to tradition, by Sts. Thomas, Thaddeus and Bartholomew. Today, in Islamic State-controlled territories, they face forced conversion to an extremist version of Islam, exorbitant taxes or death.
Most refugees live in camps in neighboring nations, and attempt to make their way to Europe. Taimoorazy has visited refugee camps, including one in Jordan this summer, to bring aid from Iraqi Christian Relief. Living conditions, she said, were very poor.
“Men have had their dignity stripped away,” she said. “They couldn’t protect their families. They can’t work anymore. They have to wait in lines to receive aid. What does this experience do to a man?
“Children need schools, playgrounds, television programs. It’s extremely difficult to be educated. They don’t have anything; they’re playing in the dirt and not in school.
She continued, saying, “Women are irate. They’re watching their men slip away in depression. They’re watching their children waste away. They’ve lost their dignity as women, to take be able to take care of their families. To cook for their families – that basic right has been stripped away from these women. What is an Assyrian woman going through who has lost her kitchen and her ability to be a wife, to be a mother, to be a female?”
Taimoorazy said Iraqi Christian Relief helped 130,000 Christians in northern Iraq last year, while more than 1.2 million Assyrian Christians have been displaced. The organization needs more than just dollars, Taimoorazy said.
“We ask people to pray and fast,” she said. “We ask people to offer up their petitions and penance.”
Even facing persecution and displacement, Taimoorazy said the people have kept their faith. In the refugee camp in Jordan she met an old man and thought how his parents and grandparents had been persecuted. Now he was there, stripped of his family, possessions and home, effectively sentenced to die in a foreign land, a situation that brought Taimoorazy to tears.
“There was a woman who came to me as I was crying and said, ‘Sister, why you are crying?’ And I said I’m crying for you, for what has happened. And she took my hands and said, ‘God is great. God is merciful and he will not forsake us.’”
For more information, visit iraqichristianrelief.org.
CHRISTIANS IN DANGER  PRESENTATION
St. Lawrence Martyr, parish center,  2815 Jessup Road, Jessup
SEPT. 25, 7 P.M.
Juliana Taimoorazy, founder and president of the Iraqi Christian Relief Council, discusses religious persecution faced by Assyrian (modern-day Iraqi) Christians and ways to help them; sponsored by the parish’s Trinitarians.
Space is limited. RSVP to 410-799-1970 or office@saintlawrencemartyr.org.